Lady Gaga was recognized for her charity efforts yesterday in Iceland and awarded the LennonOno Grant for Peace by the famous Yoko Ono. 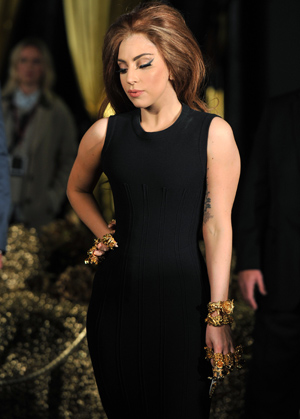 The time has come for Lady Gaga‘s humanitarian efforts to be recognized!

The songstress was awarded the LennonOno Grant for Peace yesterday in Iceland by Yoko Ono herself. The award is shaped like a puzzle piece (how neat is that?) and comes with a $50,000 grant.

“I will be donating this grant to the Elton John AIDS Foundation, and I will be working closely with them to ensure that the money goes specifically to those orphans and disadvantaged youth in America born with HIV or AIDS,” Gaga stated.

In case you’re thinking, “Gee, isn’t Gaga just some lady who dresses up all weird and makes mediocre music? Why is she getting this award?”

And that may seem like a sound point, considering Gaga’s philanthropy takes a back seat to the controversy she continuously stirs, but the singer is actually quite involved in various charities and relief efforts. Aside from her dedication to HIV/AIDS prevention and research programs, Gaga has also donated copious sums of money to the 2010 Haiti earthquake and the 2011 Japan earthquake/tsunami relief efforts. She has also founded the Born This Way Foundation, which aims to empower modern youth. Bam!

“I dare you to be compassionate in a cynical age,” said Gaga while accepting the award, which she is sharing with the imprisoned Russian band, Pussy Riot.

You don’t have to like her style, her music or personal life, but you cannot deny that Lady Gaga is committed to helping others. Opinions?