This is not what we expected from a Los Angeles-set film — it isn’t sunny at all! A brand new trailer for Lindsay Lohan’s new film, an L.A. noir co-starring James Deen, has been released. Check it out! 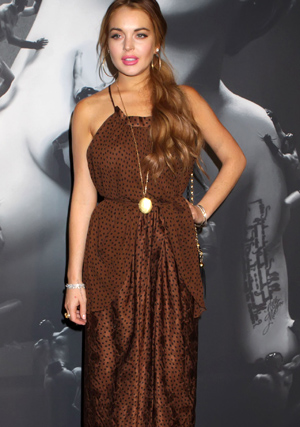 Oh my… Maybe we’re just not artsy enough to understand this, but…

Another trailer of Lindsay Lohan‘s newest film endeavour, The Canyons, directed by Paul Schrader, has been released (the first one was just a montage of Los Angeles), and this one is really… something?

Set to some cheesy music, sans any speaking, compiled in what was probably Movie Maker using a Halloween font, this trailer is either artsy beyond our comprehension or it just sucks.

The film aims to be a contemporary L.A. noir, preaching the dangers of drugs, sex and overt ambition through the lives of several 20-somethings. It stars Lindsay Lohan, the adult movie industry’s James Deen and director Gus Van Sant (we’re not sure if he just got lost and stumbled on-set).

The introduction to The Canyons in the trailer is supported by the tagline “where the sex is as cheap as the budget, and the only way out is death.” So ominous and intriguing, almost like a half-open can of tuna…

But enough jabber; we can’t do this trailer justice. Just watch it, and let us know what you thought!