Brad Pitt sometimes forgets how important he is to the acting community. The actor jumped at the opportunity to go for a joyride with a film co-star, but the execs were not too pleased. 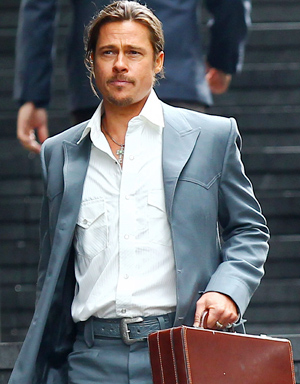 Whatever you do, don’t damage the actor!

Brad Pitt‘s Killing Them Softly co-star Scoot McNairy has learned first-hand what a valuable commodity Angelina Jolie‘s fiance is after whisking him away for a top-notch joyride in the car McNairy drives in the film.

“I peeled out with Brad in it,” the actor said at the premiere of Argo. “They were like, ‘Hey, Scoot, you got to understand, you got a 20-million-dollar actor in the car. Don’t ever do that again.’ I was like, ‘I got this, I got this. I’m from Texas.'”

Well, you can’t argue with that kind of logic — Texans are a wacky bunch, yes? Pitt must have felt very inanimate, being discussed like some precious commodity, but apparently the joyride was a success, and the 48-year-old father of six “was loving it.”

“He’s a guy’s guy,” McNairy said. “When you look up in the dictionary the word ‘guy,’ you see a picture of Brad. He’s just super-cool, super-chill, super-normal and super-down-to-earth.”

Look at that — all these years of fame, women and copious amounts of money have not wrecked Brad Pitt as a person. Well, this just makes him all the more enticing! Our crush shall never fade!

Brad Pitt’s getting in touch with his feminine side
Brad Pitt leaves U.K. motorcycle store owner in awe
Angelina Jolie and Brad Pitt are engaged!