The representation of human excellence, Meryl Streep, has donated a cool $1 million to New York’s Public Theater in honour of founder Joseph Papp and of Nora Ephron. 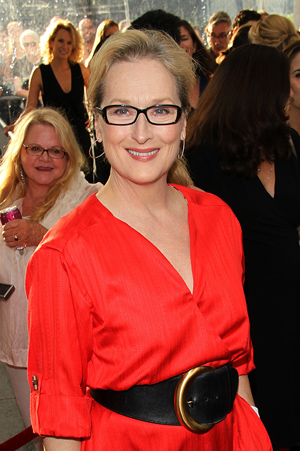 We hope your self-confidence is skyrocketing today, because this Meryl Streep girl really bums us out… We like to avoid perfection whenever we can.

The Oscar-winning actress has made a generous donation of $1 million to New York’s Public Theater in honour of its founder, Joseph Papp, and the late writer-director Nora Ephron. Streep just makes it so incredibly difficult to dislike her. What’s up with that?

“I give this gift in honour of the founder of The Public Theater, my friend and mentor, Joseph Papp, and in remembrance of one of the theatre’s board members and greatest supporters, my friend Nora Ephron,” Streep announced yesterday.

The actress began work with the theatre over three decades ago, with Trelawny of the Wells in 1975 and Henry V in 1976. The donation comes just in time, as The Public Theater is unveiling a $40 million renovation of its downtown location.

“Meryl is as great a citizen as she is an actor,” stated the theatre’s artistic director, Oskar Eustis. “Joe Papp founded The Public in the belief that great theatre belonged to all the people. It means an enormous amount to us that the greatest actor of our time supports that mission.”

She really is, isn’t she? Oh, Meryl, you goddess of all things good and holy in this world. What do you guys think? Who loves Meryl even more now?