Well, that’s no fun! The feud between Mariah Carey and Nicki Minaj shall not be continued. It turns out Carey is just not feeling it. 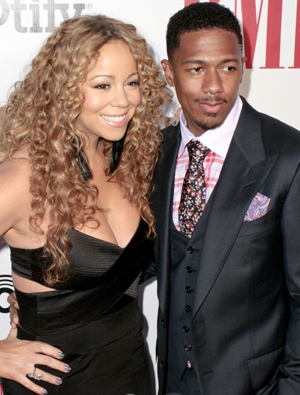 So, remember the little feudy-feud between Mariah Carey and Nicki Minaj? Well, as epic as it was, Mariah is totally over it.

Nick Cannon, Mariah’s hubby, revealed that the singer is not fazed by the quarrel (caught on video) and is not deterred from working on American Idol — at all.

“I always say my wife is the strongest, classiest woman that I’ve ever met in any situation. I’m never concerned about her handling herself,” Cannon told E! News. “A lot of times when you think about… why America loves these shows, it’s all about people accomplishing and reaching their dreams and being guided by the experts. At times when we seem to lose our composure, it’s kinda disappointing, but we move on, and hopefully [the conflict] isn’t what the show becomes about.”

But the rumours persist of possible judge replacements, fist fights, hair tearing and anything else you can think of. Mr. Cannon, however, reassures us that will not happen because of Carey.

“My wife’s not moved by the theatrics or pageantry,” he continued. “She’s just there to do her job and help young people on this show that we’ve all grown to love.”

In case you missed it, a video of Nicki Minaj going berserk with profanities aimed at Carey was leaked online recently. It has garnered quite a bit of attention and obviously revealed some serious tension between the new judges.

The judges are back to work now; no new conflict has been reported — yet. What do you think of this ordeal?