This is adorable; join us in aw-ing! Stanley Tucci and wife Felicity Blunt have been married for two months but decided to throw an official ceremony, with Meryl Streep in attendance. 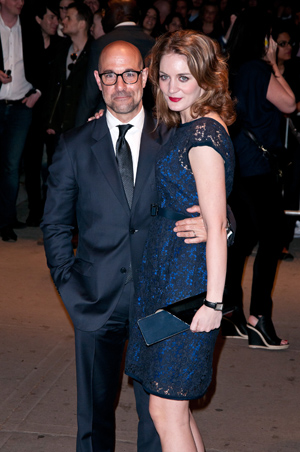 Aww… This is so ridiculously sweet, you may just get a toothache.

Despite being married for two months now, Stanley Tucci and wife Felicity Blunt decided to go ahead and throw a formal ceremony anyway! Cute, no?

The couple threw the wedding ceremony at Middle Temple Hall in London. Felicity’s sister, Emily Blunt, was the bridesmaid, and Steve Buscemi was the best man. The bride wore a Nanette Lepore gown, while the groom sported a Hugo Boss tuxedo.

Of course, celebrity guests were in attendance, like Emily Blunt’s hubby, John Krasinski, Meryl Streep, Kenneth Cole, Colin Firth, Julianne Moore and Patricia Clarkson. The reception was held at the L’Anima restaurant, and guests munched on a cake composed of three wheels of cheese. How amazing is that? We hope no one was lactose intolerant…

Is anyone else incredibly jealous that Meryl Streep (who is perfect) attended Tucci’s wedding? Can she also attend our dinner party, please and thank you?

Tucci was previously to Kathryn, who passed away from cancer in 2009. They have three children together.

We are very happy for the couple! Stanley Tucci is one of the most adorable people in the whole entire world! Congrats! Opinions?