We love us some Olivia Munn, so this little piece of information is even more exciting! The actress will be making a guest appearance on the quirky comedy New Girl. 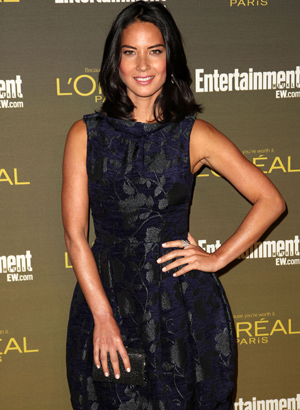 Olivia Munn is joining a host of guest stars on the popular show starring Zooey Deschanel. The actress will be appearing in multiple episodes as Nick’s (Jake Johnson) charming and sexy romantic interest, Angie.

The filming for these episodes is not for another few weeks, but we are licensed to be excited for them now! Other stars to have made an appearance on New Girl include Lake Bell, Katrina Bowden and Lizzy Caplan.

If you just can’t possibly wait to see Munn on the old tube (her New Girl episodes will air in November), tune in on HBO to catch the actress being awesome on Aaron Sorkin’s The Newsroom.

We are so excited! Not only because of our undeniable love for the show and for Munn, but we just can’t wait for the comedy to ensue. The antics, the jokes, the laughs to come… It’s almost too much, but yet, not enough.

Will you be tuning in to see Munn’s guest appearance, or will you skip it?

Olivia Munn has a new man!
Meet the new coaches of The Voice!
Did Kelsey Grammer run out on Piers Morgan?