Miley Cyrus may be in a bit of trouble with fiance Liam Hemsworth. After posting some troubling tweets, Liam wants the actress to quit Twitter for good. 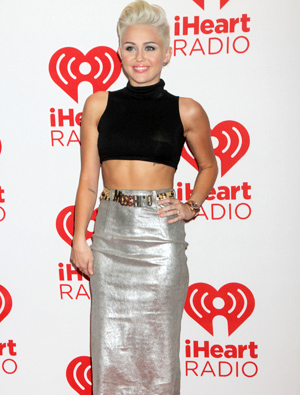 We all know Miley Cyrus is an avid tweeter; hence the many controversies revolving around her Twitter account. Well, remember that one time the actress tweeted about passion and the lack of it in her life? Surprise! Her fiance, Liam Hemsworth, is not feeling too hot about it…

The ambiguous tweets set the internet world on fayaaa with breakup rumours, and despite Cyrus’ best efforts, they were never quelled. Now according to new reports, Hemsworth is pressuring Miley to quit the Twitterverse — forever! Dun dun dun.

“She tried to pass it off like it had nothing to do with him, but it totally affected him, no matter what she tries to say,” a source told Star magazine. “She was trying to get his attention, but she just ended up making him pull away from her more. He thinks she’s acting like an immature schoolgirl, and he wants her to get off Twitter completely.”

We don’t mean to be the reality check people, but Cyrus is 19 years old — she is a schoolgirl. But her mouth is definitely getting her into trouble. Isn’t that endearing? No?

Should Miley get off Twitter, or keep doing her thang? Let us know.

The Buzz – Liam Hemsworth to Miley Cyrus: Get Off Twitter, For Good!
Liam Hemsworth is furious with Miley Cyrus, and it’s all because of Twitter! He’s telling her to delete her account for good.

16 mins ago
by Giovana Gelhoren