At least we’re done talking about his neck tattoo. Chris Brown will remain on probation after testing positive for marijuana. Plus, there appears to be a complication with his community service. 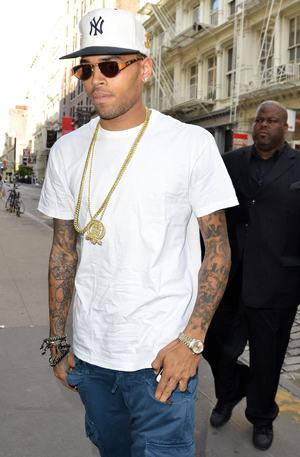 Chris Brown is not a free man yet.

The singer and his attorney, Mark Geragos, showed up to court yesterday in Los Angeles for a probation hearing, but walked away with some rather bad news. We must say, though, Brown looked like a real gentleman, wearing a white button-down shirt and a grey vest.

Judge Patricia Schnegg decided to not revoke Brown’s probation after the singer/rapper tested positive for marijuana, despite his assertions that it was obtained with a medical marijuana card and used in California (his probation is enforced in Virginia).

Another issue that arose amidst the hearing was that the district attorney requested Brown to present proof of completion of his community hours. The singer revealed that he’d conducted the volunteering alone and had not signed in.

The D.A. has ordered a probation-violation hearing for Nov. 1, and Brown must register with California probation within 72 hours and appear in court on that day.

In case you’ve forgotten, Brown is on probation for assaulting his then girlfriend Rihanna in 2009. He was sentenced to five years’ probation and 180 hours of community service.

So there you go. Opinions?

What really went down between Drake and Chris Brown?
Chris Brown’s tattoo is not a battered Rihanna
Chris Brown: Dog breeder?