This is what headlines are for. The iHeartRadio Festival has come and gone, but all we remember is Billie Joe Armstrong’s big mouth. The Green Day front man mouthed off about time restrictions and snuck in a Justin Bieber diss. Oy! 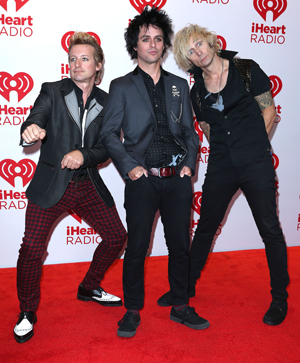 Being courteous is not very rock & roll, is it?

The band’s lead, Billie Joe Armstrong, seemed a little pestered that a time restriction was imposed on its performance (as it was for the other performers), and to ease the pain, he ranted every five minutes, using all available English profanities.

Somehow Green Day still managed to gift the audience with some of its greats, like “Basket Case” and new single “Oh Love,” while cursing the evils of time, nonetheless.

At the one-minute mark, Armstrong exclaimed, “I’m not f******* Justin Bieber!” while flying the one-finger salute. And the band mates joined him in trashing their instruments…

“One minute… God f******* love you all… We’ll be back,” Armstrong screamed before walking offstage.

We’re sure the punk rock fans enjoyed this little ode to anarchy and anti-establishment salute, but come on! A bit of respect goes a long way, and don’t pull Bieber into this… Some things are sacred! We’re glad he wasn’t actually at the event — otherwise there could have been some fervent eye-poking.

The festival did feature numerous other artists, like Rihanna, No Doubt, Usher, Bon Jovi, Taylor Swift and Pink, just to name a few. But none of them complained, so Billie Joe needs to simmer down.

What do you think? Much ado about nothing, or should the Green Day boys get a time out?

The Buzz – Billie Joe Armstrong Meltdown & Other iHeartRadio News
We covered the iHeartRadio Music Festival all weekend long, and got interviews with some of your favorite celebrities including Usher, Ne-Yo and Miranda Lambert.

Green Day’s Billie Joe is back
Billie Joe Armstrong joins The Voice!
Rihanna vs. Taylor Swift at the MTV EMAs