This is kind of Road Runner style, no? Kelsey Grammer reportedly ran out on the Piers Morgan Tonight show after seeing a photo of his ex-wife. Seriously? 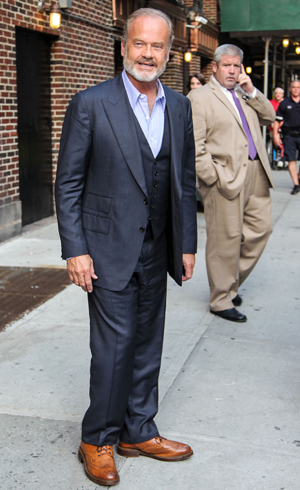 Yesterday evening Piers Morgan revealed that his scheduled guest on Piers Morgan Tonight, Kelsey Grammer (or Frasier), hightailed off the set moments before his interview because he saw a photo of his ex-wife in the opening sequence.

“Kelsey Grammer was supposed to be on my show now but ran out of the building. Strange,” Morgan tweeted, adding, “So, Kelsey Grammer saw a photo of his ex wife Camille in the open to our show and legged it. Extraordinary. Never had this happen before.”

Le shock. We’re not sure what to do with that. If Grammer booked it from the set because of the photo, we can only suggest that Mr. Morgan should implement a chaining procedure to guarantee the presence of his guests. Although, according to Grammer’s rep, Stan Rosenfield, it was all Piers’ fault, obviously:

“Piers needs to take responsibility for what he did to Kelsey. It’s called accountability.”

That very well may be, but there’s also a little something called commitment. If Grammer agreed to the interview, he has to stick out; otherwise his reputation is as good as a handful of air.

The actor was actually scheduled for the appearance on Piers to promote the second season of Boss, in which he plays a Chicago mayor who is secretly battling an incurable disease.

Just in case you’re not familiar with the actor’s colourful personal life, here’s the backstory: Grammer married his third wife, Camille Donatacci, in 1997 and divorced her in 2011. They have two children together. The former Cheers star married flight attendant Kayte Walsh just two weeks after his divorce was finalized. He must still be a wee bit bitter.

Well, that’s that. We’re sure Morgan will not let this one slide, and many jokes will be birthed from this little incident. Opinions?

Meet the new coaches of The Voice!
American Idol judges all seated!
Announcements galore on the Bachelor Pad 3 finale