Just when you think Lady Gaga can’t possibly surprise you anymore, she does. The songstress appeared in London wearing a burka-like outfit adorned with pelts and carrying a risque clutch. 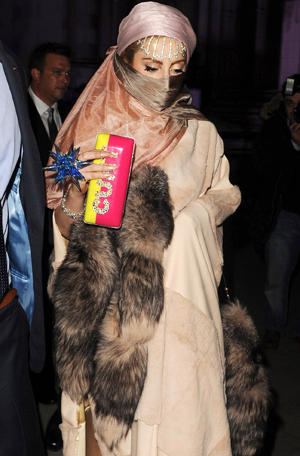 If anyone has any reservations as to whether Lady Gaga likes to stir up controversy, just check out the photo to your right.

Depicted is Gaga leaving the Philip Treacy fashion show in London wearing what appears to be a bedazzled burka, some furry animal bodies dangling off her arm and a clutch with the word “c***” visibly emblazoned on it… And that may be a snowflake ring on her finger.

Now, there’s such a thing as making a statement, and then there’s Gaga, who makes the face-to-palm manoeuvre a necessary daily gesture. She looks like an ignorant child who happened to fall into grandmama’s trunk of silken scarves and furs from the 1930s and then tied them carelessly about. And then stole her older sister’s profane clutch. If any thought went into putting together that outfit, we would be very sad.

Just because this outfit was created for the sole purpose of discussion and shock, we think PETA, offended religious factions and all parental associations of the world should immediately attack. Spray-paint or flour-bomb the Gaga out of this girl.

We love her to pieces, but she shouldn’t try so darn hard to get tongues wagging. Opinions?