An odd topic to tackle, this whole feminist business. But Keira Knightley has no fear! The actress discusses the negative stigma around being a feminist. 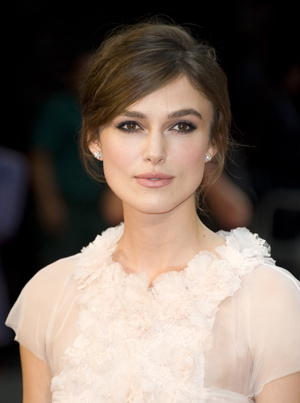 As delicate and girlish as Keira Knightley appears, she’s no pushover. Home girl knows what she wants and has a sturdy feminist side to her.

In a discussion of feminism in the October issue of Vogue, the topic was inspired by former State Department Director of Policy Planning Anne-Marie Slaughter’s decision to pursue motherhood full time instead of a career, and the actress revealed that she is unwilling to echo such a decision.

“I’m glad that the subject is coming up again,” she told the magazine. “I remember doing interviews, and people would ask, as if it was a joke, ‘So you mean you are a feminist?’ As though feminism couldn’t be discussed unless we were making fun of it. I don’t want to deny my femininity.

“But would I want to be a stay-at-home mother? No. On the other hand, you should be allowed to do that, as should men, without being sneered at.”

Bam! That pretty head is not just a hat rack, people! We’re glad to see her speaking out — feminism really is a glossed-over issue.

Is this ringing true, or just some crazy hubbub? Men at home? Don’t be crazy! Let us know.