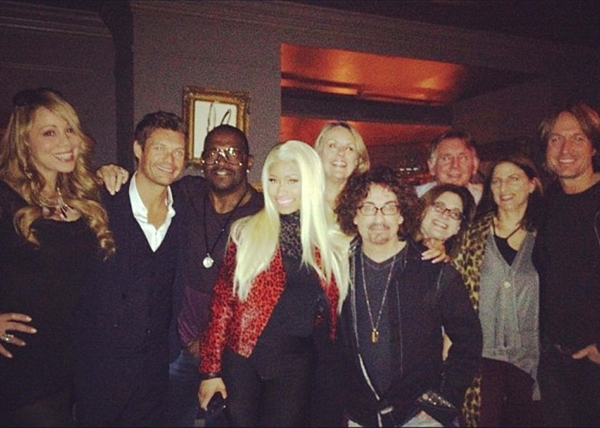 Well, this is just so amazing and unexpected!

The foursome got together in New York to kick off season 12 auditions and went out for a quaint dinner (pictured) the night before. This season is bound to be the most exciting yet, with a motley of musical styles and opinions. Plus, we get to stare at Keith Urban the whole time… Life is good.

“It’s official, your new #IdolJudges are @MariahCarey, @NickiMinaj, @KeithUrban & @Yo_RandyJackson! ?http://instagr.am/p/Po5T3JFWf1/,” Ryan Seacrest tweeted, adding, “Everyone gave a heartfelt toast about being on the show after we ate last night. Cant wait to see the first contestants today. #IdolJudges.”

We’re just going to throw it out there one more time… Keith Urban! Now, we’re done.

How are you feeling about the new season? Liking the new judging panel, or not so much?