It wouldn’t be as cute if they randomly did it, but it works for them! Emma Stone and Andrew Garfield took on the paparazzi skulking outside their restaurant by making their own signs to promote their favourite charities. Awesome, no? 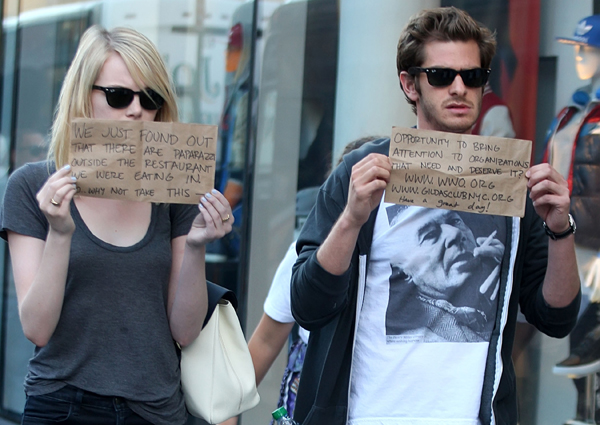 Just in case you had any doubt that Emma Stone and Andrew Garfield are the sweetest couple ever — and we mean ever — the following ought to solidify this obviously indisputable fact.

When the sneaky paparazzi discovered the duo’s whereabouts on Saturday — amidst a luncheon at a New York restaurant — the couple did not falter or despair. Instead EmDrew emerged with cardboard signs that not only cheekily poked fun at the paps, but that also spread the word about their favourite charities. That’s some clever multi-tasking right there!

“We just found out that there are paparazzi outside the restaurant we were eating in. So why not take this opportunity to bring attention to organizations that need and deserve it? www.wwo.org and gildasclubnyc.org. Have a great day!” read the signs the Amazing Spider-Man co-stars — and now lovebirds — used to cover their faces.

Now, since we fully approve of such mischievous behaviour, a moment must be dedicated to these lovely charities. Wordwide Orphans Foundation, through numerous educational, developmental and medical programs, aims to help orphans become “healthy, independent, productive members of their communities.”

The Gilda’s Club New York City is a charity named after the famed comedienne Gilda Radner, who died of cancer in 1989, and started up by Gilda’s husband, Gene Wilder, aimed to create a nurturing environment for those suffering from the disease. The organization’s website describes the charity as a place where friends and family can “join together to build social and emotional support as a supplement to medical care.”

Good on ya, Emma and Andrew, for using the paparazzi to promote some great causes. If either of those sound like your cup of tea, please donate a few bucks to keep them going. Opinions?

17 mins ago
by Giovana Gelhoren