It is Lady Gaga, after all. Yesterday the songstress launched her first perfume, Fame, while celebrity guests looked on as she received a neck tattoo while sitting inside a giant perfume bottle. 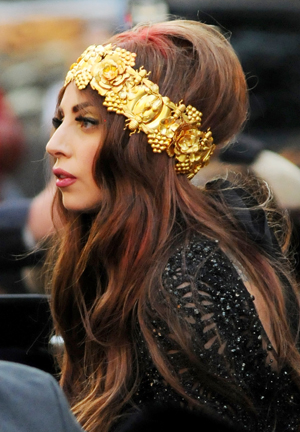 So Lady Gaga launched her new perfume, Fame, yesterday night, and it was a doozy. It was as if you were in the midst of the most bizarre dream you’ve ever had, except it was real…

Gaga arrived at the Solomon R. Guggenheim Museum in New York on a black convertible, wearing a Prabal Gurung gown (so, practically naked) with a golden, Grecian goddess-like headpiece. The whole launch was live-streamed on Gaga’s website.

The singer then appeared in the museum, sitting in a giant replica of her perfume bottle, which isn’t unusual — she seems to like to sit inside things… Then Gaga stripped down to lingerie and started to get a tattoo on the back of her neck (which she shaved a la Friar Tuck last week) whilst putting on makeup and playing on an iPad! Does anyone else feel like they’ve smoked something illegal?

And while Gaga was being abstract inside a bottle, the hundreds of guests (including Yoko Ono, Marc Jacobs, Lindsay Lohan and Jason Wu) pranced around in costumes and masks.

The perfume itself was initially described to contain “blood and semen,” and then Gaga claimed that it aims to smell like an “expensive hooker” (which is very promising). The perfume is black in colour but sprays on clear. It is reported to be the first of its kind.

Well, there you go. If that sounds like your type of scent, check it out, and let us know what you think.