We suppose there’s no use trying to woo him now. Zachary Quinto has confirmed he is indeed dating Jonathan Groff of the popular show Glee. 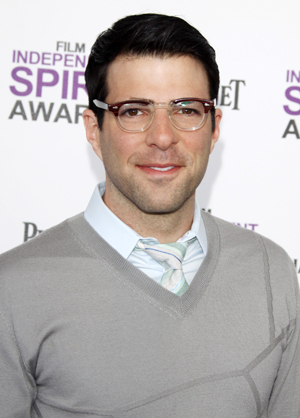 Oh, sweet baby Hercules! That awful screeching sound etching your ears is the sound of millions of women crying and millions of kidnapping plots being spawned.

Sorry, but that stalking route will have to be redirected, because Zachary Quinto is no longer available. The actor, who came out as gay in October (sob, sob), confirmed he is dating Glee actor Jonathan Groff.

The cruel, infinite sadness has enveloped our hearts… Wait! We’re still allowed to ogle him, right? Otherwise, what is left of life, really?

The couple has been spotted out and about on different occasions, but until Quinto’s interview with Out magazine, the relationship was never confirmed. And not to be selfish or anything, but we liked the blanket of ignorance better.

“I had to do a lot of work on the couch to really get to a place where I was able to show up to a relationship with someone who was actually capable of being in one — and that took a lot of trial and error. And I’m still working on all that stuff — that will never stop,” the actor told Out. “I’m incredibly happy, I’m incredibly lucky.”

Teardrops on our guitar… No, but our relentless adoration for Zachary aside, we’re very happy he’s found someone. Groff has the hair of Michelangelo’s “David” — we don’t blame Quinto for falling for him.

Congrats to the newly confirmed couple. Live long and prosper! We had to squeeze in at least one Star Trek reference; Quinto is Mr. Spock, after all. Opinions?