Poor girl… Demi Lovato keeps swatting those pesky dating rumours, but they keep on coming. The star is yet again reported to be dating actor Wilmer Valderrama. 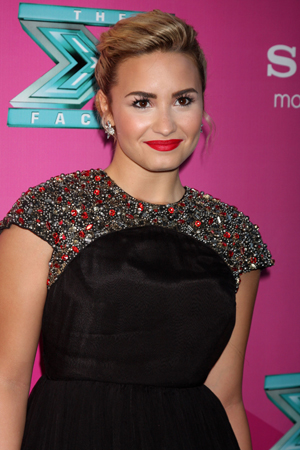 There’s just something unbearable about the thought of a gorgeous woman being single, no? Which would explain a lot of these rumours…

Demi Lovato appears to be a new favourite for romance speculation; she can’t even grab a coffee with a male friend without marriage proposal rumours. Since the songstress already dispelled reports of a possible romantic relationship with One Direction’s Niall Horan, the gossip eye has returned to its former obsession: Wilmer Valderrama.

The 32-year-old That ’70s Show actor and Lovato were spotted grabbing dinner at El Torito in Sherman Oaks, California, on Sunday, reigniting the old dating rumours. This is a duo that is so secretive about their relationship, nobody knows what’s going on there. The talk on the street is that Lovato and Valderrama were friends, then dated last year (never confirmed), broke up (also not confirmed) and now are back together (obviously not confirmed).

A source told E! News that Lovato spent her 20th birthday with the actor and they are, in fact, dating. And if you pair this information with the overt tweet Valderrama posted on Lovato’s birthday:

“Feliz Cumpleanos 2 my angel @ddlovato, U continue 2 make me proud. U are the hero this generation it’s been waiting 4! With & by you always.”

Maybe there’s some credibility to this story. Or maybe they are just dedicated friends… With a hefty 12-year age difference, we really hope it’s the latter.

Well, the gossip mill keeps on turning, and we’ll see what else it brings. Opinions?

Demi Lovato takes a break from Twitter
Is Demi Lovato going to be an X Factor judge?
Demi Lovato: “Being a celebrity is dangerous”

24 mins ago
by Giovana Gelhoren