Oy. Someone just can’t keep his name out of the headlines. Chris Brown is fuelling conversations yet again, this time because of a neck tattoo depicting a battered woman. Is it Rihanna? 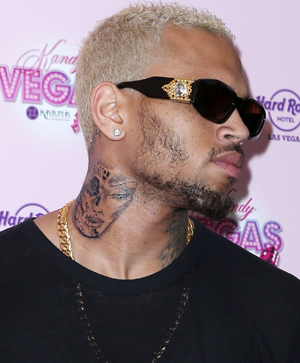 So Chris Brown got new ink, y’all! And this one is sure stirring the pot of controversy.

The newest tattoo (on his neck!) is of a woman’s face, the left half of which is deteriorated or badly bludgeoned. Now, given that Brown does not exactly have a record of non-aggression, the tattoo has led many to believe it is a twisted depiction of Rihanna… Is it?

According to Brown’s rep and Brown himself, no, it is not. The singer’s publicist has clarified that the illustration used for the tattoo is a design created for MAC cosmetics to mark the Mexican celebration of the Day of the Dead. Brown reportedly paid the artist for the rights to replicate the illustration on his neck-ular area.

“I’m an artist and this is art. Dia de los Muertos,” the singer tweeted yesterday.

It’s hardly surprising that the meaning behind the tattoo was misconstrued. Brown was convicted of assaulting his then girlfriend Rihanna in 2009, leaving her with a black eye and a bruised lip. Both injuries can be traced on the face of the woman in the tattoo.

Since the assault, Brown and Rihanna have had a very public and extremely confusing friendship, which includes a weird kiss at last week’s MTV Video Music Awards, a musical collaboration and Rihanna’s shocking confession to Oprah, claiming Brown is the love of her life. These two are overwhelming.

Maybe we’re reading too much into it, or maybe the tattoo is in bad taste. You be the judge. Opinions?