Hollywood “it” couple Ryan Reynolds and Blake Lively tied the knot this weekend at a very stealthy wedding ceremony in South Carolina. 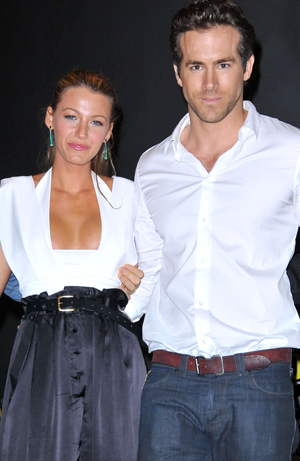 Shh… Can you keep a secret? Of course not. But that’s OK — everyone knows already.

In a ceremony so secret that the couple themselves probably did not know about it until it was over, Lively and Reynolds swapped vows and rings.

According to reports, the wedding took place at the Boone Hall Plantation in Mt. Pleasant, South Carolina, yesterday evening. It was attended by only close friends and family. Music was provided by Florence Welch and Bette Midler. That sounds so cozy and quaint, no?

So where is this precious information coming from? The local radio station 95.1 FM actually broke the news to the world:

“Hold up, there’s another story that it’s Ryan Reynolds and he married Blake Lively at the Cotton Docks today!” read the tweet on the station’s Twitter account.

Kelly Gukanovich, who works at 95.1 FM, told E! News, “A few days ago I heard Ryan was back in town. Then today lots of signs went up at Boone Hall Plantation stating that it was holding a private event, so no one could get into the area. I also started hearing rumours that a celebrity wedding was taking place.”

“I am being told there were around 60 people at the event and that a local restaurant may have catered it. Ryan has always loved it here, and when he got together with Blake, he started to bring her here too.”

That’s so sweet and so un-Hollywood-like… Don’t celebrity couples get married on a cliff at some exotic destination, with David Bowie officiating the ceremony to the music of one thousand rare purple doves chirping “The Wedding March”? No?

This is Lively’s first walk down the aisle and second for Reynolds, who was previously married to Scarlett Johansson.

Congrats to the happy couple. Opinions?