Well, we tried. You’d think out of love for Robert Pattinson we’d be able to boycott Kristen Stewart for her evil deeds. Nope — we love her more. 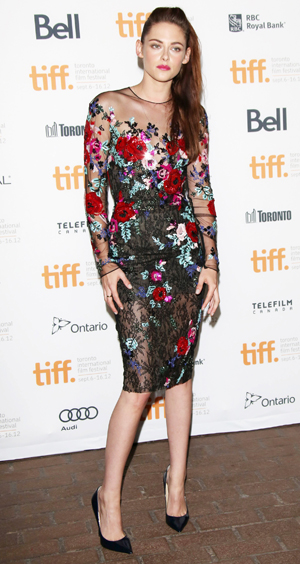 Gargh… After the cheating scandal, don’t you just want to be filled with putrid hatred toward Kristen Stewart whilst silently pitying Robert Pattinson and his broken heart?

Well, she’s making it impossible! Yesterday Pattinson hit up the MTV Video Music Awards wearing what appeared to be hand-me-downs from a late ’90s high school football player and a head full of greasy, bird’s nest hair… Stewart, on the other hand, making her first public appearance apres scandal, attended the premiere of On the Road at the Toronto International Film Festival looking friggin’ amazing!

Despite our hopes to see a tragic “fallen woman” scene unfold on the red carpet — including a colourful monologue and Cheetos-stained sweatpants — to our sheer disgust, Kristen knocked this one out of the park. Wearing a Zuhair Murad dress, slick half-do and a subtle quantity of makeup, we couldn’t find anything to be annoyed with. Stewart even smiled for the camera, for Pete’s sake! And that was after she ran off to sign autographs for fans…

What are you doing, Kristen? You’re a cheating woman; you’re not supposed to be pleasant and lovable! You’re supposed to be crawling out of a steaming crack in the ground, covered in slime and trying to seduce everyone! Right? We’re so conflicted now.

Does this mean that when celebrities make mistakes, they don’t morph into goblins or become lowly, despicable people? Maybe — just maybe — Kristen is not an evil spawn of el diablo, set upon the villages to seduce married men. That’s deep, existential, metaphysical stuff right there.