This is what happens when kids want to get married — they get distracted! Miley Cyrus has opted to focus on making new music and will plan her wedding further down the road. 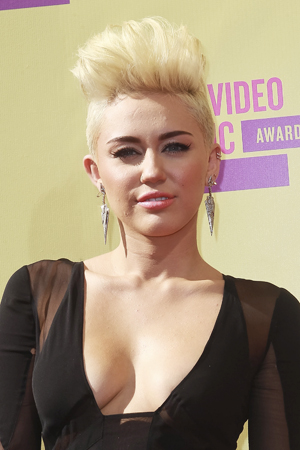 Why hurry? Miley Cyrus has snagged herself a handsome man (Liam Hemsworth), to whom she is engaged, and has the whole world at her feet. Marriage can always wait.

The 19-year-old star (rocking her new do, by the way) revealed that her marriage plans will wait awhile in the name of music!

“I’ve got so much going with this record. This record’s going to, like, kill me,” she said at the MTV Video Music Awards. “I’m really excited to get obviously married, but I kind of already feel married. I know we’re forever, and I don’t really need a paper right now.”

Did anyone else notice she was practically naked in that dress? But we digress…

Cyrus also told the press that she’s planning to drop a new single this year, so all the Miley fans out there can rejoice.

“We’ve been working really hard, and the record, I’m really proud of the album. It’s my favourite thing I’ve done, probably ever.”

Unless you are a Cyrus fan, that statement is really not that promising. But still, we are expecting the new album to be a little more toned down (fingers crossed) and maybe even grown up. She’s only 19 years old; she has her whole life to get married.