The brief hospitalization was not enough to slow this guy down. Green Day’s front man Billie Joe Armstrong is still scheduled to appear at the MTV Video Music Awards. 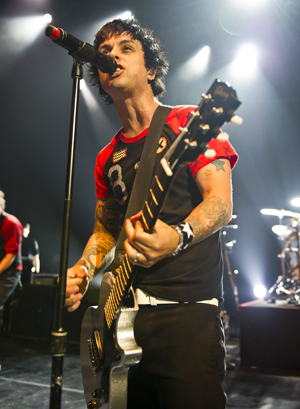 Fear not, Green Day fans. Billie Joe Armstrong is on the mend!

The band’s lead was hospitalized in Italy over the weekend for an unspecified illness, forcing several concerts to be cancelled. He arrived in Los Angeles yesterday.

Several reports allege the illness is throat related, but there has been no confirmation yet. Armstrong’s bandmates, Mike Dirnt and Tre Cool, have released a video apology to the fans affected by the cancelled tour dates.

“We apologize profusely,” said Dirnt. “Billy got rushed to the hospital last night due to illness. The doctors don’t think it’s a good idea for him to play today.”

Tre added, “We’re as sad as you guys are. Billie’s extremely upset about it, and we’ll see you very soon.”

The band is back on track now, with a scheduled performance at the MTV Video Music Awards on Thursday. Green Day is planning to debut a brand new track from its upcoming album trilogy ¡Uno!, ¡Dos!, ¡Tre!, with ¡Uno! scheduled for release Sept. 25.

Well, we hope all is well with Armstrong, and we hope the fans are staying strong despite missing the concert. Opinions?

Will.i.am is out of this world!
Did The Foo Fighters play their last show?
Madonna sends audio message to Aussie fans