Welcome back, Harry! The prince has reappeared post-Vegas photos in the name of charity at the WellChild Awards. C’mon, someone must have asked about that cray-cray party. 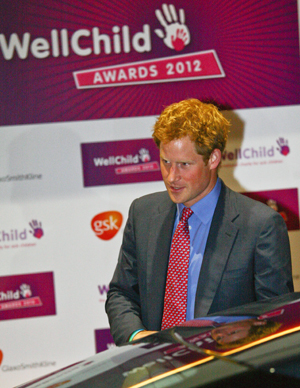 Since the whole scandalous Vegas nekkid prince photo business, Harry appeared to have forced himself into temporary reclusion — probably stocking up on classy suits and practicing his “I’m-not-affected-by-this-ordeal-not-even-one-bit” face. Let’s see if it worked.

The mischievous prince has reappeared in the public eye, but this time fully clothed, attending the WellChild Awards held at the InterContinental Hotel in London on Monday.

Harry is an avid supporter of the U.K. WellChild charity, which aids seriously ill children and their families. The award ceremony is purposed to recognize courageous youths battling severe ailments and the people who make a difference in their lives.

The prince’s nude adventure was not forgotten, of course, despite the goodwill surroundings. Little 6-year-old leukemia patient Alex Logan told an ITV interviewer that he’d like to tell the Harry, “I’m glad you kept your clothes on [today].”

The prince obviously jumped at the opportunity to converse with the pint-sized funnyman, telling him with a grin:

“You keep looking up at your mum. It looks like you’re dying to say something, but you’re worried she’ll tell you off. I heard you were on ITV earlier, and you said something cheeky, but let’s not talk about that here.”

We’re glad the young royal’s reputation is not tainted significantly, and hopefully we’ll be seeing him out and about again. Opinions?