Put on your best shocked face, because here’s some Lindsay Lohan scandal news! The young actress has been banned from the famed Chateau Marmont after failing to settle her bill. 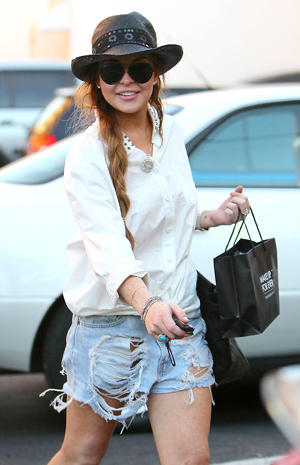 Oh, Lin-Lins, you messy celeb, you…

After being acquitted of partaking in an alleged jewellery theft, Lindsay Lohan may have been riding a small wave of happiness — until renowned Hollywood hotel Chateau Marmont banned the actress from its premises.

The Chateau has been a home away from home for Lohan for years, and she no doubt has spent many a penny for those spacious penthouses. So what gives?

According to reports, Lohan has neglected to pay a $46,350.04 bill from her most recent stay. Holy mother of the unimaginative! Did she eat the hotel suite and now it must be rebuilt? How else would one rack up that sum?

Luckily you don’t need your imagination on this one, since TMZ obtained not only the documented ban, but also the breakdown of Lohan’s expenditures during her adventurous 47-day stay.

So here’s a little sample: The 26-year-old starlet was charged $686 for cigarettes (about 49 packs), $3145.07 for the mini-bar (O-M-G!), $625 for laundry, and thousands more by the hotel restaurant and room service. Lindsay spends like a person who’s just discovered money. And apparently she smokes like a chimney.

Of course, the hotel is not at all happy with the leak of this extensive bill, and someone is going to get into a whole whack of trouble for it.

“Chateau Marmont places guest privacy as a core value and upholds this privacy with paramount importance. After investigation, it appears that a private correspondence between Chateau Marmont’s general manager and Miss Lohan was leaked by a member of her entourage. We are as horrified, disappointed and troubled by this occurrence as Miss Lohan surely is. Obviously this is a private matter between one of our guests and the hotel, and we will continue to treat it as such.”

New reports are suggesting that the producers of Liz & Dick had an agreement with Lohan to cover the bill but have failed to do so. Lindsay has agreed to settle the bill if the producers refuse. We think that’s fair, since she’s the one who ate, drank and smoked her way up to a five-figure debt in the first place.