A Utah station has banned The New Normal for its “inappropriate” content. Activist group GLAAD and show cast member Ellen Barkin weigh in on the decision. 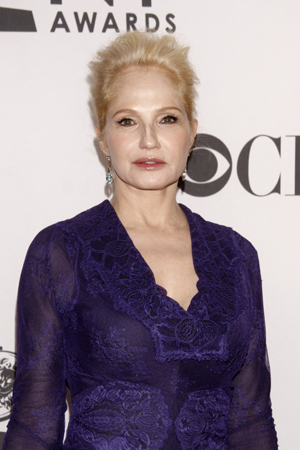 Apparently the One Million Moms are not the only ones who are not down with The New Normal.

A Utah television station has decided not to air the new NBC comedy, citing crude language and offensive material as the major motive.

“After viewing the pilot episode of The New Normal, we have made the decision to keep it off our fall schedule. For our brand, this program simply feels inappropriate on several dimensions, especially during family viewing time,” stated Jeff Simpson, CEO of Bonneville International, a KSL-parent company.

The New Normal has already ignited a fire with the conservative group One Million Moms, which called for the show’s boycott. The series simply tells the story of a single mum who chooses to become a surrogate for a same-sex couple, which is why it’s getting so many knickers in a bunch…

GLAAD, naturally, responded to the station’s statement in its usual cool and sophisticated manner:

“Same-sex families are a beloved part of American television thanks to shows like Modern Family, Glee and Grey’s Anatomy,” GLAAD president Herndon Graddick said. “While audiences, critics and advertisers have all supported LGBT stories, KSL is demonstrating how deeply out of touch it is with the rest of the country.”

Graddick went on to invite Simpson to meet a few families of the LGBT community to see their normality for himself; he also warned that the television station is “sending a dangerous message to Utah.”

Ellen Barkin, who plays conservative character Jane on the show, was a little less collected than GLAAD and vented her own frustration with the station’s decision via Twitter:

“Shame on u ?@kslcom not airing ?@NBCTheNewNormal So L&O SVU (rape & child murder) is ok? But loving gay couple having a baby is inappropriate?,” the actress tweeted on Friday, adding, “Anyone in Utah interested in @NBCTheNewNormal please clog up @ksl5tv feed 4 their blatantly homophic decision 2 not air the show #KSLBigots.”

Not the best way to garner a reputable following, but a sound argument nonetheless. The television station is sending a volatile message — that violence and crime are more viable sources of content than the exploration of the real-life struggles of a same-sex couple, including their fight against prejudice, which KSL is perpetuating.

We say, air the show and allow the viewers to decide whether or not they want to see it. Isn’t America all about freedom? Opinions?

Michael J. Fox coming back to TV!
John Noble is back!
Mayim Bialik back on set after car crash