Some people amp up the romance while others take extreme plotting to new heights — which makes for an intense fifth episode of Bachelor Pad 3! 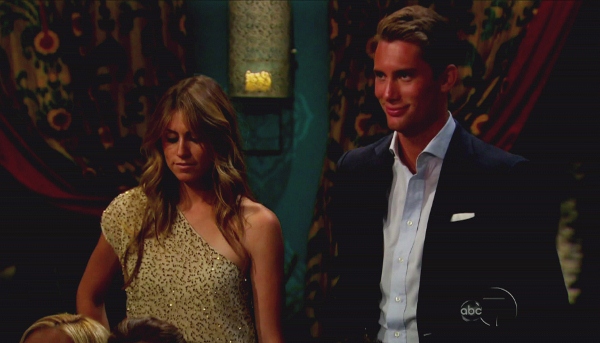 Finally there’s a name for it! All season we’ve been wondering what it is that makes Chris able to constantly switch his story and make everyone around him eagerly jump on board for the ride. But he gives a name to it himself as he sets to work early getting people on his side for the upcoming elimination. His powers of persuasion are undeniably fierce.

The arrogant, condescending Kalon seen on The Bachelorette seems to have disappeared and been replaced by a new, playful, potentially falling-in-love version of himself. On his date with Lindzi he goes so far as to say “I’m actually, possibly, maybe in love with the person I’m spending time with.” Not the most solid confession of love, but it’s still something. So who’s the real Kalon, then? Hopefully we’ll know the answer before the season finishes!

Blakeley’s career at Hooters earns her the rose at the saucer carrying challenge. And she and Tony head off on an overnight date at a trailer… not exactly what they had in mind. But they make the most of it. They really make the most of it. Their romance feels a little out of the blue considering we haven’t seen them interact all season but maybe they’re just what each other needs!

The fake date is the best date

The Bachelor Pad producers may have only allotted for two dates this episode. But Rachel and Michael prove a quality evening doesn’t need all the trimmings. We already can’t wait to see if this cute couple stays together for the long haul!

There’s a lot of romance blooming in in the mansion — but apparently not for Jaclyn and Ed. When Chris Harrison goes around the room asking everyone about how their relationships are going, Jaclyn’s reaction is so sweet and bashful. But it quickly turns to heartbreak when Ed states he isn’t there for romance. When they talk about it later he claims he didn’t think he was leading her on. How is sleeping in the same bed every night not at least a little bit leading and worthy of clarification at some time other than in a room full of people? Poor Jaclyn. But she’s a tough cookie — she’ll bounce back.

In a Bachelor Pad first, the voting rules change for the night. Everyone votes for the girl they want to go home and that girl gets to select which guy to take down with her. A total frenzy ensues as everyone scrambles to make new plans.

Despite some big moves on Michael’s part to vote off Erica Rose and convince her it was all Chris’ idea — she figures out his plan and sends him home. Michael’s witty comments on others’ antics and his blooming romance with Rachel have provided a well needed dose of sanity to the show. His departure will likely mean tears and delusional fighting will reign over the house until the finale. The twist might have gotten him kicked out but here’s hoping his abilities to strategize and powers of persuasion get him a spot on a show where they’re truly appreciated — such as Big Brother. The more Michael we get, the happier we’ll be!