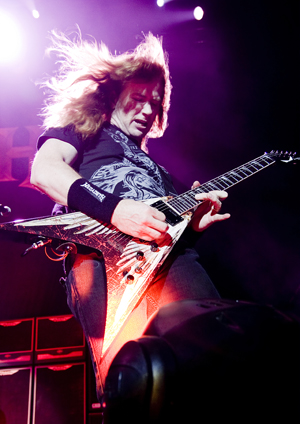 Obviously someone is having a bad case of verbal diarrhea…

Oh boy, this one’s a doozy.

The rocker blabbed all over the place, accusing Obama of conspiracy and even calling the U.S. “Nazi America.” Obviously a Singapore concert is the best platform for an American political rant…

“Back in my country, my president, he’s trying to pass a gun ban, so he’s staging all of these murders, like the ‘Fast and Furious’ thing down at the border; Aurora, Colorado, all the people that were killed there; and now the beautiful people at the Sikh temple,” Mustaine said between songs.

“I was talking to J.D., our promoter here tonight,” he continued. “What a great guy. I was saying, ‘I don’t know where I’m gonna live if America keeps going the way it’s going, because it looks like it’s turning into Nazi America. And he said, ‘Move down here to Singapore.'”

It’s difficult to even criticize such a statement, since it lacks any actual coherence and is plagued with conspiracy paranoia. There have been no investigations or accusations of President Obama being in any way related to the tragic massacre in Colorado. The United States has a long history of gun violence, regardless of whether the president was in support of gun control. Those statements are without merit and unfortunately are simple rants. And the word “Nazi” was just misused as a defamatory term and not for any kind of credence.

Certainly not a good image booster for Mustaine, but it happens. What do you think of those statements? Opinionate!