The second Hunger Games film is promising to be even better than the first, and no wonder: Look at this cast! Here are the latest actors to join Catching Fire. 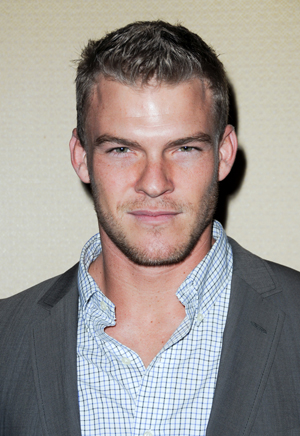 The filming date is practically galloping toward us, so the folks working on The Hunger Games‘ sequel, Catching Fire, have picked up speed with the casting. Here’s who made the cut.

The role of District 1 female tribute Cashmere, summoned for the Quarter Quell in Catching Fire, has been given to Stephanie Leigh Schlund. The actress is relatively unknown but has appeared in the pilot for Drop Dead Diva and will perform in the new FOX series The Following. The character of Cashmere and her brother Gloss (also a former Hunger Games winner) form a Career Alliance with Enobaria and Brutus, and prove to be formidable enemies for Katniss.

Alan Ritchson (of Spike’s Blue Mountain State and pictured right) has been cast for the role of Gloss, also a former victor.

Another character to be cast from the Career Alliance in Catching Fire is Brutus, who will be played by Bruno Gunn (who appeared in Sons of Anarchy). Brutus was a District 2 tribute and former Hunger Games victor (like Enobaria); he is distinguished for his strength.

Well, now we know what all the “evil” tributes look like, and we have no complaints. The Hunger Games: Catching Fire is scheduled for release Nov. 22, 2013, and the cast looks flawless.

Are you excited about the second franchise instalment?