He had us a little worried, but Robert Pattinson was all smiles at the Cosmopolis premiere in New York after staying under the radar post Kristen Stewart breakup. 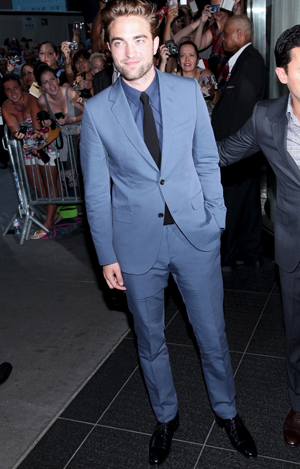 Robert Pattinson has officially come out of hiding and faced the entertainment world head-on following his reported breakup with Kristen Stewart and the cheating scandal.

Come to think of it, that makes a curiously enticing book title: The Cheating Scandal and a Breakup by Robert Pattinson. Sounds mighty intellectual.

Back to the story…

The actor looked dapper and all kinds of fiery hot when he stepped out in a blue Gucci suit to attend the premiere of his newest film, Cosmopolis, at the Museum of Modern Art in New York City.

But the extravaganza continued when the 26-year-old actor appeared on The Daily Show and Jon Stewart jokingly broke out the ice cream to soothe away Pattinson’s “heartache” and attempted to girl-talk through his problems.

“Now, we’re just a couple of gals talking,” Stewart said whilst enjoying his Ben & Jerry’s. “All right… Tell me everything.”

Surprisingly Pattinson not only was in excellent humour, but he also nailed all his jokes, telling Stewart, “I’m trying to avoid eating this. I’m going to split my Spanx.”

He later added, “My biggest problem in my life is I’m cheap and I didn’t hire a publicist.”

And with that statement, he vowed to hire one immediately. That definitely explains the prolonged seclusion from the public eye and the lack of statements of any sort. Pattinson is your average homegrown guy who was just hit with an unfortunate scandal (not that any scandals are fortunate).

No word yet on the current status of Pattinson and Kristen Stewart’s relationship after she was caught cheating on the actor with Snow White and the Huntsman director Rupert Sanders.

We are glad to see Robert is not blue and is putting an effort into moving forward with his life. Opinions?