One would think the more episodes of Bachelor Pad that air, the more certain questions would get answered. But that just doesn’t seem to be the case, as the questions only become more prominent in tonight’s fourth episode. 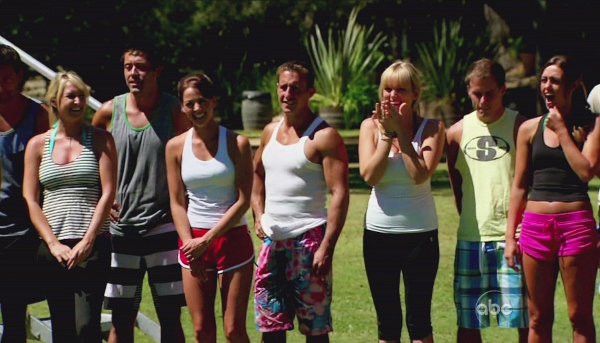 Does anyone remember the Chris who was so head-over-heels in love with Emily Maynard that he was permanently on the verge of tears toward the end out of fear he wouldn’t get to introduce her to his family? ‘Cause we’re having a hard time remembering that guy. This new version of Chris who compares women to cars he can trade in for better models is not enjoyable.

Why is Jamie so blind?

Oh, Jamie. Why? Why are you so stuck on Chris? She manages to believe everything he does is for her benefit, when he is really totally playing her. Did anyone count the number of times Jamie called Chris “loyal” while he was plotting how he could avoid her and then wound up getting a hotel room with Sarah? Was it half a dozen? A full dozen? We lost count, it was so upsetting. It’s probably for the best she got sent home tonight and can get some space to clear her head.

What are Kalon and Lindzi up to?

It was exciting to find out Lindzi was going to be on the show, because she was such a sweetheart on Ben Flajnik’s season of The Bachelor. And then it seemed certain drama was in store when we discovered the villain from Emily Maynard’s season — Kalon — would be on this season of Bachelor Pad. So one would expect two such big names would get a lot of air time if romance ensued. So why hasn’t it? Other than the occasional shot of them cuddling or moments where other contestants mention they’re hooking up, we are totally out of the loop. Very disappointing!

How is Michael Stagliano so cool?

Seriously! For a guy who went into the third season of Bachelor Pad purely to find love, he is sure working his magic in the strategy department. But not maliciously as many strategists do. He seems to just naturally inspire others to treat him like a leader and coach. And he and Rachel are so cute and funny together. Here’s hoping they can go all the way and win this thing!