We’re not picky, but every once in a while, can Canada win a gold medal? As day 14 comes to a close, here is your tally of the medals. 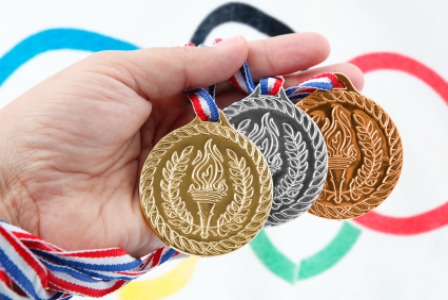 The Olympics are slowly but surely coming to a close, but the medals just keep pouring in. Here are the gold, the silver and the bronze of day 14.

Another wrestling medal was handed to Russia today in the freestyle 55 kilogram class after Dzhamal Otarsultanov narrowly edged past his opponent, Georgian Vladimer Khinchegashvili, 1-0 4-3. This is Russia’s fourth gold medal in the sport. Khinchegashvili was awarded the silver, Republic of Korea’s Kyong-il Yang and Japan’s Shinichi Yumoto the bronze.

Since Russia never rests, the country’s women’s synchronized swimming team picked up another gold medal with a total score of 197.030. The team has won gold in every world championship since 1998 and stood atop the podium at the 2008 Beijing Games. China was left with the silver in this competition, and Spain took the bronze.

A surprising gold medal win came from New Zealand: The women’s duo Jo Aleh and Olivia Powrie picked up the top prize in sailing 470 competition. This was New Zealand’s fourth gold medal and 12th in total. Britain received the silver in the finals, and the Netherlands won the bronze. Well done, ladies!

Team U.S.A. picked up another gold medal and set a new record at the same time. The women’s 100-metre relay team raced to the top of the podium in a time of 40.82. All the ladies on the American team were already gold medallists — now that’s impressive. On their heels, the Jamaican team claimed the silver in 41.41, and Ukraine won the bronze in 42.04.