This may surprise you, but not everyone sees Rihanna as a family-friendly role model. The new CEO for Nivea is nixing the singer as the face of the company’s campaign. 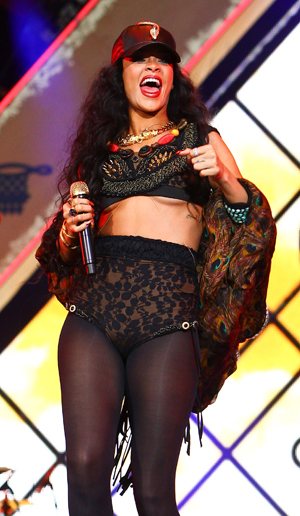 Stefan Heidenreich, the new CEO of Nivea’s parent firm, Beiersdorf, does not think Rihanna makes the best model for the cosmetic company.

Well, this is just so unexpected…

The 24-year-old singer became the face of Nivea last year to mark the company’s 100th anniversary (the brand also sponsored her world tour); ads included a naked half-body shot of Rihanna and a TV spot featuring a family using Nivea products whilst “California King Bed” plays in the background. Has anyone watched the video for that song, per chance?

“Rihanna is a no-go… I do not understand how to bring the core brand of Nivea in conjunction with Rihanna,” Heidenreich told German newspaper Welt. “Nivea is a company which stands for trust, family and reliability.”

Wait, Rihanna does not embody trust, family and reliability? We are shocked.

Nivea seemed pretty excited about the sponsorship deal last year, hoping Rihanna’s fame would help the brand gain popularity among the younger generation. And the singer must be quite comfortable now, considering this partnership with the brand propelled her to number three on Forbes‘ 30 richest celebrities under 30 (she earned $53 million in 12 months!) list.

We don’t understand how a traditional cosmetic company such as Nivea considered Rihanna a qualified model for its brand in the first place — she’s involved in a new scandal practically every week, not to mention we see her undressed more often than not! Not quite family-friendly.

Rihanna would make an excellent spokesperson for a stockings company, or a leather-cap-making organization, or a hospital…

That was a definite miss, but Heidenreich is on it. We don’t think Ri-Ri will suffer greatly, though; the singer’s still on top of the world.

Who do you think should be the new face of Nivea?