So much excitement at the Olympics today: Canadians moving on to finals in men’s kayaking, gold medals awarded to Iran, Ukraine and the U.K., and let’s not forget about those women’s soccer finals! 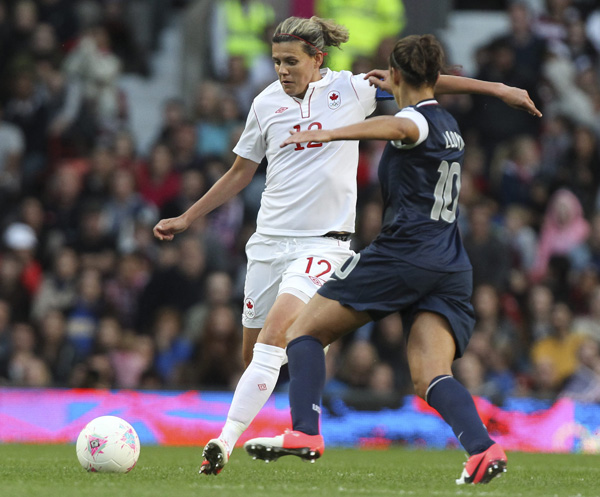 Day 10 at the London 2012 Summer Olympics is coming to an end — what’s the magical tally of achievements? Let’s take a look, shall we?

We begin on home turf. Canada’s seasoned sprint kayaker Adam van Koeverden may have a chance at winning another gold medal (he’s won one medal of every colour in his career so far) in men’s kayak single (K1) 1,000 metres after snatching the first spot in today’s semifinals with a time of 3:28.209. Norway and Denmark were close behind. The final race is tomorrow.

The biggest heartbreak for Canada undoubtedly was the Women’s Soccer semifinals against the U.S. After leading the game 3-2, referee Christiana Pendersen of Norway awarded the States with a free kick after calling Canadian goalkeeper Eron McLeod for time-wasting (apparently she held on to the ball longer than six seconds). U.S. Abby Wambach seized the opportunity and evened the score to 3-3, driving the game into the dreaded extra-time which ended in a bitter defeat for Canada at 4-3. The conroversy is nested in the referee’s call, since the penalty for “time wasting” is at severest a warning or a yellow card, never a free kick. No team member was left with dry eyes and our team is moving onto battling it out for the bronze medal against France.

“I told her you never see the six-second call without a warning, first of all, and then to get a penalty shot called as a result. It’s shocking. That’s all I said to her,” Canadian captain Christine Sinclair stated about her confrontation with Pendersen.

Keep your chins up ladies, it was a cruel call on Penderson’s part and a spiteful at that. At the very least, we are certain the bronze is ours, even if the finals were snatched away from our team.

In other news, Omid Haji Noroozi brought in a second gold medal for Iran today and second ever in Greco-Roman wrestling (he was competing in the 60 kilogram category) for the state. Noroozi beat Georgian Revaz Lashkhi with 1-0, 1-0. The first gold and Greco-Roman discipline medal was hauled in by Hamid Soryan in the 55 kilogram category.

After finishing tied with the Netherlands in two rounds, Great Britain won the gold medal in team jumping. The Netherlands had to settle for silver, while Saudi Arabia received the bronze. This is the first time the Britons have claimed gold in the jumping discipline since 1952 at the Helsinki Games (60 years ago!). They have waited a long time for it, and the Brit team has certainly earned it.

Another gold medal was awarded to Oleksiy Torokhtiy of Ukraine in men’s 105 kilogram weightlifting, with clean and jerk of 227 kilograms with his final lift. Ukraine’s win put Iranian Nasirshelal in silver and Poland’s Bonk in bronze.

Good news for Team Japan: The women’s soccer team is moving on to the finals after defeating France 2-1. Although the Japanese team is skilled, it’s hard to deny that Sarah Bouhaddi and Elise Bussaglia were not at their best. But all is fair in love and war; Japan is moving one step closer to the gold (and meeting U.S. in the final).

Busy day in London today. What was your favourite moment? Share!