Canadian’s are getting their party hats on and ditching their ever-so humble behaviors (if for only one day) to celebrate finally snagging a gold medal at the London 2012 Olympics in a sport that is making us jump for joy – literally! 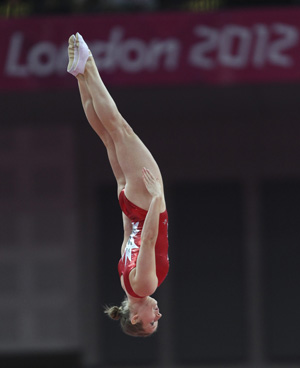 Canadians are jumping for joy after Rosie MacLennan won Canada’s first Olympic gold medal in London! The 23-year-old — whose hometown is King City, Ontario but currently lives in Toronto, Ontario — impressively showed off her jumping, precision and summersault skills when she managed to score 57.305 and beat out competitors Huang Shanshan and He Wenna of China who claimed the silver and bronze medals. Rosie told CTV Olympics that she was stunned at the win, but of course extremely pleased with the results.

“It’s an unbelievable feeling, it’s a dream come true. The only thing that would’ve made it better is if Karen [Cockburn] was standing up there with me,” says Rosie to CTV Olympics.

Although Canadian and trampoline extradonnaire Cockburn — who has won three medals in the past for trampoline — was upset that she came in fourth place, despite telling CTV that she was sure that she would have made third place, says she is really happy for Rosie and that “it’s a good thing for Canada to win a gold medal.”

She’s right on that one. Now that Canada has won gold, we hope it keeps going up from here — let’s cross our fingers!

His name is quite fitting — he really does bolt!

Whether your from North America, Europe or Asia, chances are you were excited to see if the man dubbed as “the fastest man on earth” snag a spot in the semi-finals of the 100-metre race. And of course, Usain did not fail to make the semi-finals and won with a 10.09 second time in the first round heat. The 25-year-old runner will be joined by fellow Jamaican Yohan Blake, American’s Tyson Gay and Canadian Justyn Warner. Make sure to watch the semi-finals tomorrow and keep your eye on the screen because these guys run fast! 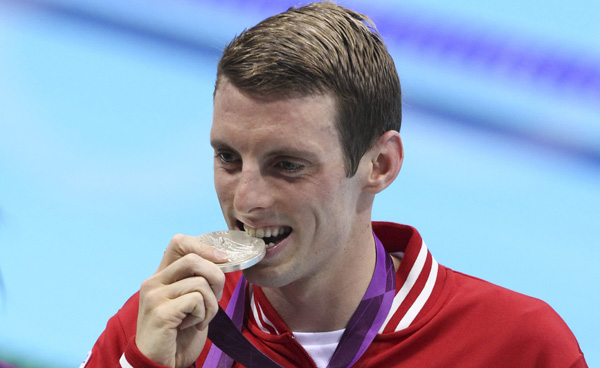 Ryan swims his way up to silver

Move over Michael Phelps, we’re cheering for Ryan Cochrane now! Well, actually we can cheer for both, but Canadian’s are proud that the Victoria-born swimmer managed to win a coveted silver medal in the men’s 1500 metre event today. Ryan, who won bronze in the 2008 Olympics, finished with a 14:39.63 time beating out Oussama Mellouli of Tunisia who came in third. Sun Yang from China came in first. Wow, Canada has won 4 medals in water-related events. Good to know that we’re good on land or in water!

Read More on the Olympics

Canada is in it to win it at London 2012!
Canada’s Olympic heroes
London 2012 Olympics: Early wins and new records