He hasn’t forgotten about us, no sir! Prince Harry surprised the athletes at Canada’s Olympic House with a visit. He talked to our winning athletes and even got his own jersey! 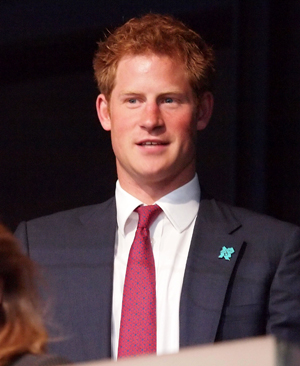 Mr. Beautiful — or Prince Harry, as he is commonly known — paid a surprise visit to the Canada Olympic House on Thursday to socialize with the Canuck athletes.

“Your Royal Highness, it’s an honour to meet you,” he said with a smile before shaking the prince’s hand.

Harry was surrounded by 123 guests in the building and chit-chatted with several athletes as well as their family members. The prince even watched Canada win another silver medal in women’s rowing at the Canuck residence.

Canadian slalom kayaker Michael Taylor asked the young royal what was the best party hot spot in London, to which Harry answered:

As a token of gratitude, Prince Harry was presented with his very own Canadian team jacket from Canadian Olympic Committee president Marcel Aubut.

Prince Harry should visit Canada more often. Just think of all the swag he’d walk away with, along with the litres of maple syrup…