You can bet one thing: Twi-hards are not pleased with the Kristen Stewart cheating scandal, which has separated the movie’s main love characters. So what’s next for the Twilight franchise? Just ask the freaked-out executives. 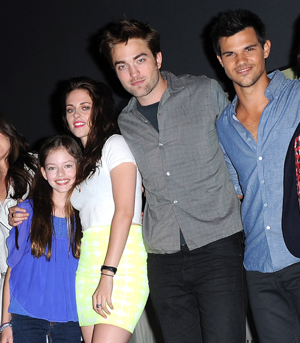 If you could sum up the whole Kristen Stewart affair, it would take a mere few words: Kristen cheats with Rupert Sanders. Kristen apologizes to Robert Pattinson, and Rupert Sanders apologizes to his wife. Rob moves out. No one is talking to each other.

Simply put, that has been the progress of events since the big, sexy reveal of Twilight‘s leading lady being involved in a cheating scandal that unfortunately wasn’t as sexy as it was when she pondered the idea of being with Jacob in New Moon. But even though Kristen has tried to wipe the slate clean and get back her unique, sometimes non-smiling, girl-next-door persona, the question Twi-hards have been pondering since this explosive news still remains: What will happen to the Twilight franchise?

Of course, the cast and crew just wrapped up the final instalment and second part to The Twilight Saga: Breaking Dawn, and Stephenie Meyer has moved on, talking about her upcoming novel-based sci-fi film, The Host. But there are still press meetings, red carpets, promotional events — you name it — until the last Twilight film comes out Nov. 16.

Although nothing has been said about how the cast and crew will handle the awkward moments to come, Kristen is trying to make amends with Robert, even though Hollywood Life reports that the affair has “officially ruined” the Twilight experience and that “he will probably never watch the films again,” according to one source.

But watching Twilight films that will be forever embedded in history won’t be the only problem for the 26-year-old British actor, who was scheduled to be co-presenter with his ex-Bella at MTV’s Video Music Awards on Sept. 6. According to People.com, this has been one of the biggest concerns of the movie’s executives.

“There’s ­serious concern about the ­promotional tour, which is set to kick off in October. Robert won’t see Kristen and is refusing to do any joint ­personal appearances with her,” says a source. “This is a potential nightmare for all involved. Fans look forward to seeing them together during interviews.”

Well, isn’t all publicity good publicity? Maybe not in this case.

As an avid Twi-hard, I really hope this doesn’t get more ugly before it gets better.

Did Kristen Stewart cheat on Robert Pattinson?
Understanding Kristen Stewart’s array of miserable face
Celebrity interview: KStew does “give a f***” about photos