Between love stories cut short, game paranoia and sibling rivalry, there are a whole lot of tears on tonight’s episode of Bachelor Pad. But it isn’t all doom and gloom in the mansion. Here’s what happened on the second episode of the show. 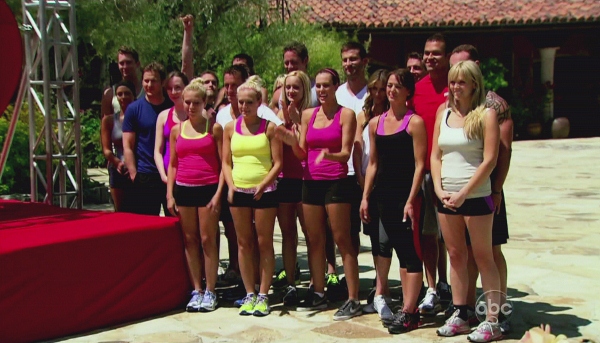 Wait, did we say tights? Sorry, we meant booty-short unitards. That is their uniform for the first competition — and there don’t seem to be any complaints. The contestants are put to the challenge of performing a rhythmic gymnastics routine. And the results are surprising! Most of the girls are train wrecks in leotards, while the guys are rhythmic perfection. Who would have guessed?

The ladies have been flocking to Chris, but now they may be starting to see him in a different light. Panic is sinking its teeth into Blakeley, and she doesn’t buy that Chris wants to be her partner through the entirety of the game. And Jamie isn’t impressed to come across him and Blakeley making out in the bunk below her. Will Chris be able to manage his shenanigans, or will it all come tumbling down?

If you’re tuning into Bachelor Pad to see contestants fall in love, we have good news for you. Tonight return contestant Michael makes it clear he isn’t about the strategy this time around; he’s about “the love connection.” And that goal is in for an exciting development when he takes Rachel on a date and is positively smitten. Look for more romance on next week’s episode!

It’s been only a short while in the mansion, but the contestants are getting frisky! It’s a night of hookups as Michael and Rachel, Chris and Blakeley, Kalon and Lindzi and David and Erica all turn up the heat. They’re beaten only by a very drunk Ed and deeply determined Sarah, who take their business to the bedroom — though their volume level ensures they aren’t fooling anyone.

The alumni are not impressed by the twins’ ongoing bickering. And they are considerably less impressed when that bickering goes on all night long. Between tears, name-calling and senseless yelling, the sisters certainly aren’t winning their ways into the hearts of the other contestants. Their arguments get so intense that the entire house is kept up virtually all night. And it’s all for naught when the sun rises and twin Brittany chooses to leave, causing her sister to have to exit the game as well, since they were playing as a team. Ryan from DeAnna’s season was voted out in the rose ceremony, but with the twins gone, that’s still two more fans down. How long do you think the final two fans — David and Donna — can last?

Bachelor Pad 3 kicks off!
The Bachelor is coming to Canada
Courtney’s written word: The Bachelor winner to pen tell-all