Well, you win some, you lose some. Busy day at London Olympics today. Here are the winners, losers and record breakers. 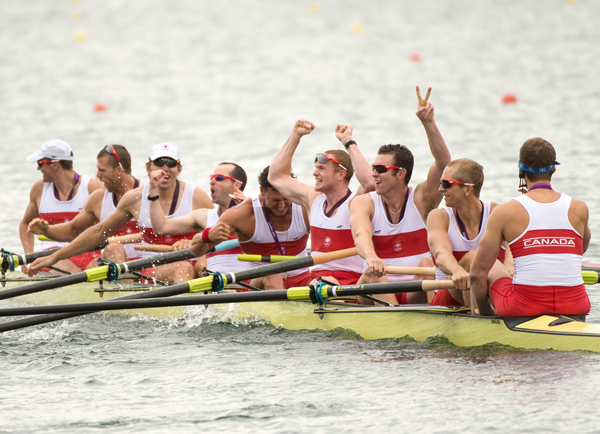 The day is not out yet, and already records have been shattered, hope is twinkling on the horizon and many defeats have been suffered…

And those defeats were definitely felt on the Canadian soil. No medals for us today, folks. But let’s keep our chins up, eh? Here’s the recap of the best of the best from Day 3.

Our Canadian rowing men’s eight did brilliantly today. After finishing fourth in heat on Saturday, we didn’t think they’d make it far in the repechage today, but that team is full of surprises. The fellas came in second with 5:27.41 performance, bested by Great Britain with a 5:26.85 time. Netherlands came in third. The finals are on Wednesday, so stay tuned.

Our neighbours down south rocked the volleyball court today. The women’s team pounded Brazil into the ground, winning three out of four sets. Brazil fell behind in the first set, won the third, but let the U.S. team run the show the whole time. High fives go out to Destinee Hooker and Jordan Larson of Team U.S.A. for kicking some serious butt.

In record breaking, British women’s double sculls team shattered an Olympic record set by Germany some 20 years ago by five seconds when they finished their heat in 6:44.33. New Zealand came in second. DPR Korea’s Kim Un Guk picked up a gold medal in men’s 62 kilogram weightlifting, with a snatch of 153 kilograms followed by a clean and jerk of 174 kilograms, for a total of 327 kilograms — breaking both world and Olympic records.

These are our highlights; more to come. Got favourite Games moments? Share!