OK, it looks bad, but hear her out. After ending a concert in Paris after just 45 minutes, Madonna’s rep explains what happened and why no one’s getting a refund. 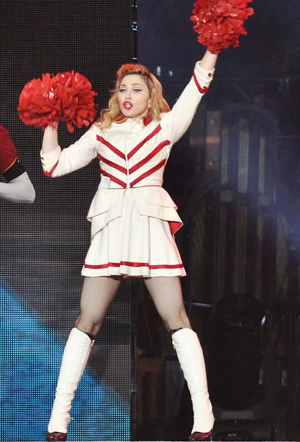 This just teaches you not judge people so quickly… It turns out Madonna snubs fans out of love, not ignorance.

Last Thursday Madge’s fans went cray-cray and demanded refunds after her concert at Paris’ Olympia ended in just 45 minutes. But before you reach for the guillotine, Madonna’s rep has an explanation.

To begin with, the Olympia concert was a last-minute addition to the Material Girl’s MDNA tour and was not intended to be a full show, nor was it advertised as such.

This last-minute show took approximately $1 million to put together, and the organizers tried their best to keep the ticket prices at bay.

The show “was her way to honour her love for French artists, French cinema and a tribute to France’s long history of welcoming and inspiring artists, authors, painters, poets and minorities from other countries over the years.”

Not to mention it acted as Madonna’s apology for slapping a swastika on the Front National Party leader’s (Marine Le Pen) face in a video showcased in one of her concerts.

This is a small consolation to the hundreds of fans who camped out to attend the Olympia concert only to watch Madonna skulk off the stage after 45 minutes. Naturally they felt cheated.

Should the attendees receive their refund, or suck it up?