It was Day 2 at the 2012 London Olympics that proved to test the mind, body and strength of its athletes with medal competitions in weightlifting and swimming and we saw Canada win its first medal in the Olympic competition! 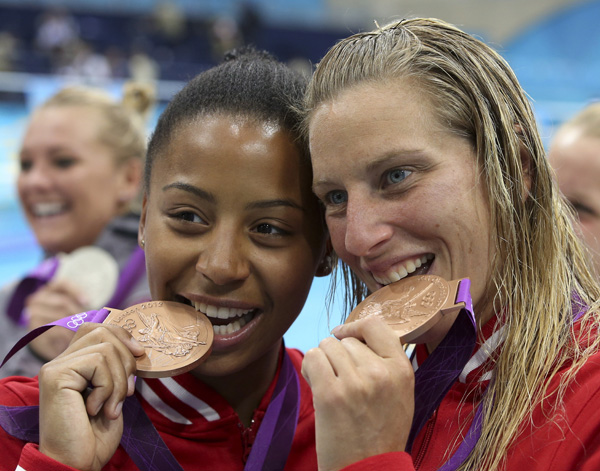 Canada is on the road to victory!

Only the second day into the 2012 London Olympics and Canadian divers and Quebec natives Émilie Heymans and Jennifer Abel snagged the bronze medal in the women’s synchronized 3 metre springboard competition, and the first medal for Canada. Yes, to put it in swimming terms – Canadian athletes dove into the game head first and succeeded! According to CTV.ca, this sweet victory isn’t the first for Emilie, who first won silver in the 2000 Olympics in Sydney, Australia, the bronze in 2004 and in the 2008 Beijing 2008 Olympics, she won her first solo medal in silver.

Women on a roll

Another major highlight of today’s games was watching the men’s freestyle relay final and watching those men swim faster than fish. Their strength and agility, which was no doubt even more so doubled with their loyal fans cheering them on, was a great knee-jerking event to watch. And what was even more exciting to watch? Watching Yun Chol Om from Democratic People’s Republic of Korea, Jingbiao Wu from People’s Republic of China and Valentin Hristov from Azerbaijan all compete in the Men’s 56kg weightlifting event. Using their super strength, their concentration and of course, their positive thoughts, these fellows pulled through in 1st, 2nd and 3rd proving that lifting super heavy weight isn’t just about body strength, but mind strength as well.

Can’t wait to see what Day 3 will bring!

What did you think about Day 2 at the 2012 London Olympics Game?

Olympics Opening Ceremony: Top notch!
Canada’s London 2012 athletes: Where they live, what they do
Canadian Olympic swimmers to watch out for