We wish there were mishaps but alas, not. In case you missed the 2012 Olympic Opening Ceremony or want to re-live the moments, here’s your chance! 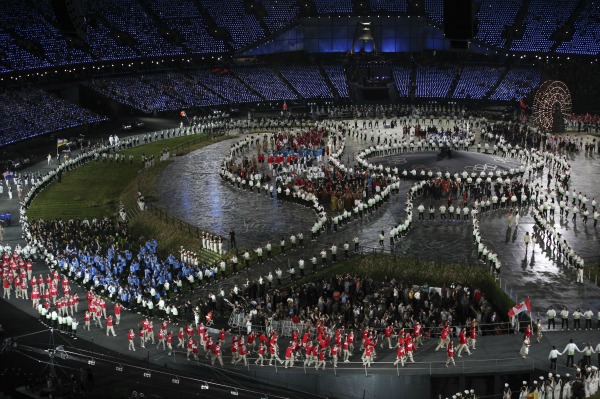 Well, the Opening Ceremony for the 2012 London Summer Olympics is finito, which means discussion tiiime!

First off, it must be addressed that the ceremony, epically titled “Isles of Wonder,” was unexpected in its execution. No one was whipping custard pie at the crowd or anything, but it surprisingly lacked the cheesiness that’s very commonplace at events of such calibre. And we appreciated it.

The ceremony (directed by Danny Boyle) opened with a video following the Thames River and some choirs belting out songs on every possible British coast — all very patriotic. Eventually, the cameras get to the stadium and are sucked into a time warp (one of several) with Britain’s historical high points played out before us.

It must be mentioned that the costumes and set design were incredible, especially in combination with the music. The props for Industrial Age were clever too, with factory workers lining the stadium and top-hatted men departing an omnibus, who then face the participants in the World Wars. Very touching, we may have cried.

Then hundreds of white glowing beds were rolled in with young children by old-fashioned nurses, all to pay tribute to the Great Ormond Street Hospital, which still receives funding largely from owning the rights to J.M. Barrie’s Peter Pan play (which he bequeathed to the clinic). A British Children’s Literature-themed dance performance ensued. Kids in hospital beds tormented by a giant Voldemort, countless creepy furry thingies and J.K. Rowling even made an appearance to read a passage. Naturally, tens of Mary Poppinses descended from the sky and banished all evil. ‘Tis the British way, no?

Then from the past we moved onto the modern, with a technology romance performance. A young couple attempting to meet up go through the different decades of music, re-visiting some of Britain’s greats like the Rolling Stones, The Beatles and Queen. Very well choreographed, numerous projections were used and once again, excellent costumes.

Finally, the teams get to shine in a magical parade of athletes. It’s impossible to go through all of them but it’s assumed that the national costumes were the most stunning, they really were.

The Australians donned very clever blazers for their uniform with Olympic gold medallists’ names embroidered in the lining. Makes them so endearing, right? 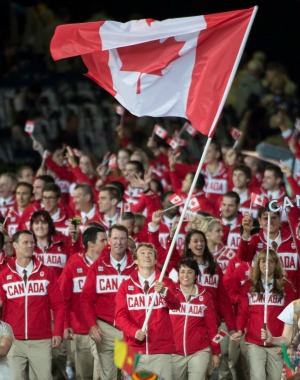 Canada waltzed out after Cameroon, decked out in nationalistic zip-ups and led by our flag-bearing triathlon athlete Simon Whitfield (the only triathlon competitor to bear a country’s flag in the ceremony). Pretty standard uniforms, nothing special but still made us feel all tingly and happy inside.

And just as a ridiculously and politically-charged bit of information, despite Israel’s request, no moment of silence was held during the ceremony for the deceased Olympic athletes killed by Palestinian gunmen at the 1972 Munich Olympics. It’s been forty years since the tragedy.

Unfortunately, our friends down South must have had the most unfortunate uniforms ever. And we mean ever. In case you’d ever have doubts as to the origins of a 529-person crowd bearing the American flag, you can just check out their clothes. The American athletes wore blue military style blazers, white pants, shorts and skirts, as well as blue berets – all designed by Ralph Lauren but ironically, made in China. We’re surprised Uncle Sam did not make an appearance… We do applaud their bravery.

The 542 British athletes marched to the sound of a standing ovation, dressed in white from head-to-toe with golden inserts. The whole Royal family was on its feet, including Prince William, Harry and Kate Middleton.

The teams lined the giant grassy hill in the middle of the field and Arctic Monkeys took the stage. During their performance of The Beatles’ “Come Together,” beautiful cyclists bearing glowing wings rode around the stadium.

Then never-ending speeches (seriously, never-ending) were made by Olympic officials, the Queen declared the Games open and David Beckham drove the boat with the torch bearer to the stadium, where it was passed from hand-to-hand finally reaching the young hopeful Olympians.

The young Olympians ran around the stadium and lit little flower petals, which rose up to form the Olympic cauldron. That, effectively, ruined any further speculation as to which celebrity or guest athlete would light it.

To wrap up the ceremony, Sir Paul McCartney sat down at his piano and seduced us with a performance of “Hey, Jude.” The crowd went wild and sang along; it took us all back to camp days when we’d belt out “Let it Be” around a fire. Great stuff.