Yes! We see signs of cooperation! Modern Family cast shows up for script-reading despite lawsuit and salary negotiations. 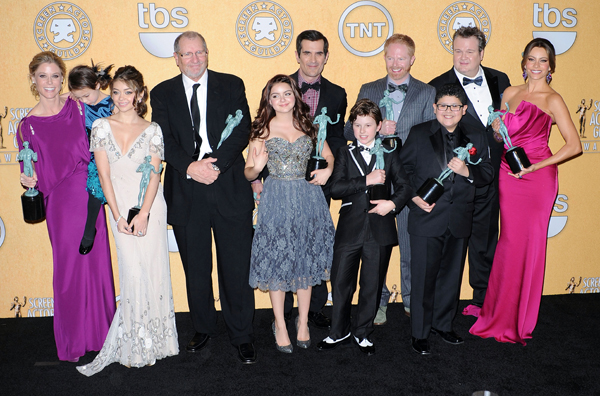 Well, lookie who has decided to come out of the bitter barn and play in the hay.

After skipping out on Tuesday’s script-reading and filing a lawsuit in attempt to void current contracts, the cast of Modern Family showed up for Thursday morning’s reading as a “goodwill gesture” in an effort to patch up salary negotiations.

The cast representatives are scheduled to meet with the show’s execs as well as co-creators Steven Levitan and Christopher Lloyd to continue salary talks.

Just to put numbers to the lawsuit, cast members were paid $65,000 per episode for the third season. FOX offered an increase to $150,000 per episode for season four (with a $50,000 bonus), with a substantial upsurge in pay for the ninth season, with salaries coming at $325,000 per episode. The cast was unhappy with that deal and is demanding more moolah in their pockets.

Holy Mother of Pearl! Those seem like decent pay increases to us. We wouldn’t kick those paycheques out of bed; that’s all we’re saying.

Meanwhile negotiations are ongoing, and hopefully everything will be resolved before the conflict affects shooting time. Stay tuned for updates!