Due to the massacre in Aurora, Colorado, the release of Gangster Squad has been postponed to allow the remaking of a shooting scene set in a theatre. 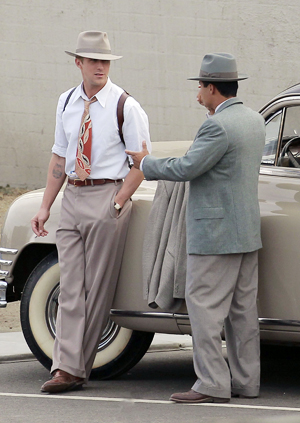 After some speculation, it has been confirmed that the release date of Gangster Squad has been pushed back from Sept. 7 all the way to Jan. 11. Warner Bros. made the announcement yesterday.

The film, set in the 1940s and ’50s, focuses on the Los Angeles police force’s efforts to control Mafia activity and features the acting talents of Ryan Gosling, Sean Penn, Josh Brolin and Emma Stone.

Although the movie has been completed, the studio has called for the revision of a climactic shootout filmed at Grauman’s Chinese Theatre in light of the tragic events in Aurora, Colorado.

The scene was featured in the Gangster Squad trailer but has since been pulled from circulation.

No word yet as to whether the scene will be moved to a different location or scrapped altogether.

Out of curiosity, if one watches a film as violent as Gangster Squad is promised to be, is sensitivity to recent events really a priority to that viewer? Violence is violence; location should matter little.