Move over, Britney Spears. Everyone has their attention on the new American Idol judge and music legend R&B singer Mariah Carey, who will make her judging debut on season 12 of the hit talent show. 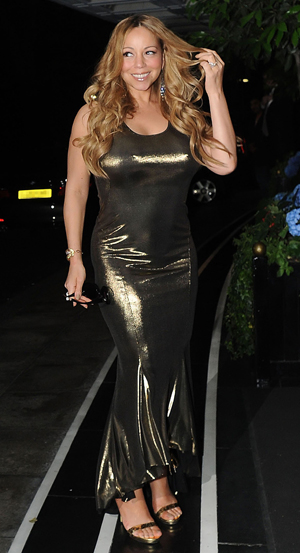 She’s a musical diva who has attitude, style, talent and — did I mention attitude? Yes, Mariah Carey is the epitome of the perfect musician, and she has been using her signature R&B voice to serenade the world since the late 1980s. From her long-lasting career that has included everything from acting to singing to now judging, Mariah is showing she is on top of everything. It may have taken The X Factor months to spill the news that Britney Spears would be that show’s new judge, but it looks like the execs at American Idol just couldn’t wait. And why should they have?

Here are just five reasons Mariah will be perfect as a season 12 American Idol judge.

1. Her music career is brutally real and honest

Mariah Carey’s career is an example of what goes up can go up again and what goes down offers the perfect opportunity to show everyone what you’re really made of. Although the singer started out producing a string of number one singles that include such favourties as “Hero,” “One Sweet Day” and “Honey,” she had some major downs, which included an emotional breakdown in 2001 and her flop debut film, Glitter. But just like her high-range voice, Mimi raised herself up to where she is now: the new judge for one of the most popular reality television singing competitions. Now tell me, what contestant would turn away from Mariah’s career advice based on what she went through?

OK, so maybe Mariah isn’t a major diva, but you have to admit she has a voice and she isn’t afraid to use it. Whether she is onstage or acting in a movie, the 42-year-old seems to ooze sophistication and attitude and demands nothing but the best. I mean, just look at how her hubby, Nick Cannon, praises her whenever her name comes out of his mouth? And even though she may not behave on the show the way she did in her music video for “Touch My Body,” we have a feeling she will be neither the super-nice coy judge or the harsh, brutal judge (we’re looking at you, Simon Cowell).

3. She’ll bring out the talent — and bring in the crowd

After meeting Paula Abdul, Randy Jackson, Simon Cowell and later Jennifer Lopez and Steven Tyler in seasons 1 to 11, American Idol won’t be the same for fans and musicians who come out to audition in front of the Precious star. Mariah’s avid followers who have longed to sing and stand poised on a stage like the singer will finally get their big chance, and with the help of this judge and mentor, also gain some invaluable insight and advice. But as the talent comes out, the ratings will come in — probably pour in. Viewers will tune in every week to see Mariah and hear what she has to say just because she’s Mariah Carey! Whether she’s nice or mean, you can bet Mariah will have the audience hanging on her every word.

This isn’t so much a reason as it is an advantage for Mariah, who, according to Us Weekly, may earn a whopping $18 million as a judge. That is $2 million more than what Britney Spears is getting and $7 million more than J.Lo was getting. A source tells the magazine that this reported paycheque will make Mariah “the highest paid judge on any music competition show.” Why so much for Mariah? Go back to point 2, and you’ll understand.

5. She can multi-task like it’s going out of style

Some celebrity judges on competition shows are one-trick ponies. They don’t want to do anything aside from their judging job, which we respect them for, of course. But much like her predecessor Jennifer Lopez, Mariah is taking all the opportunities as they come to her. While sitting at the judging table, the busy mom of adorable twins Monroe and Moroccan Scott and wife of America’s Got Talent host Nick Cannon is going to work on her new album. “I’m currently in the studio working on my new album and its first single, ‘Triumphant,’ which will be out early next month,” says Mariah in a statement she put out this week via Us Weekly. Yup, Mariah can do it all.