This is exciting! After Steven Tyler and Jennifer Lopez left American Idol, everything seemed so grey. But have no fear: Mariah Carey is sure to brighten things up… 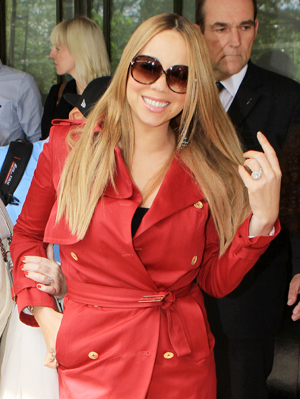 OMG, they did not just get Mariah Carey as the new American Idol judge!

Oh yes, they did.

Kevin Reilly, president of FOX network, announced today that Carey has signed the deal to join the judging table on Idol!

“It’s the biggest recording artist than any of these shows have ever had. It’s an artist many of these contestants have tried to emulate. [The deal] only concluded only hours ago. Not being the only game in town, we need to keep things fresh,” Reilly stated in his announcement.

Mariah chimed in via speakerphone: “I am so excited to be joining Idol. I wish I could have been there myself to tell you. It all kind of just happened real quickly. I can’t wait to get started in a couple months… I will see you in January!”

Holy mothership of all things good and sacred! This is huge. The old tube has not seen so much diva on TV since… ever!

Despite Jennifer Lopez and Steven Tyler leaving the show, Reilly hinted that Randy Jackson is not going anywhere, which means with Carey on board, there’s only one spot left open. So let’s throw Adam Lambert in, toss in a bucket of glitter (get it? Carey’s film), swing a couple of feather boas, and you got yourself a hot tamale of a show.

We must hyperventilate now. Excuse us.

What do you think of Mariah joining the team? And who should be the third judge?