Although it was really nice to see Emily Maynard make such smart choices in narrowing the field of contestants down to two great guys, it sure makes for an emotional roller coaster of a finale! 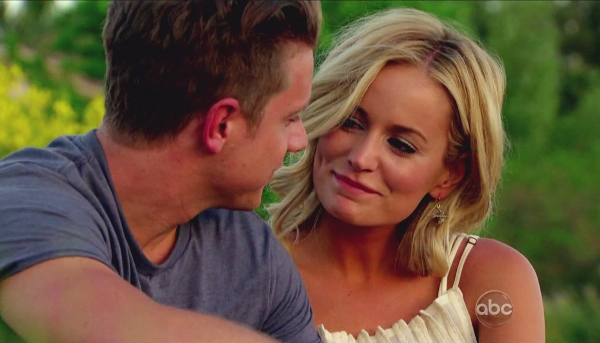 No help from the family!

Emily starts the night off by introducing Jef and Arie to her family in the hope that her parents and brother can tell her which one she should pick. Sadly they love both guys and can provide no assistance for pinpointing who she should select. No surprise there; those are two attractive, honourable and good-lookin’ dudes!

Cutest date ever with Jef

Does this guy get any sweeter? Where to even start? He listens patiently while Emily tells him how nervous she is about the decision she has to make. He tells her multiple times how sure he is about what they have. And when she finally decides she wants to introduce him to Ricki, he straps on a pair of ridiculously oversized pink goggles and splashes around in the pool with her. Seriously, can there just be an army of Jef clones for the rest of us?

A heartbreaking goodbye to Arie

After her dream date as a family with Jef, Emily knows it’s meant to be. But that leaves one messy and tragic task: telling Arie. Emily knows she can’t go through with their date when she feels so strongly about Jef and tearfully tells Arie she has more confidence in her other relationship. Considering Arie seemed pretty close to a shoo-in from the first date, it’s no wonder he was taken aback by her announcement. Even as he drives off, he remarks, “I still believe that she’s the love of my life.” So sad!

It was exciting when Brad Womack picked Emily to propose to at the end of his season, as she was clearly a beautiful person inside and out. But it’s tough to see how much that relationship’s not working out affected her. Between being scared to introduce any new man to Ricki after she did so with Brad and then felt guilty when it ended, and then not being sure if she can accept a proposal and risk being engaged three times, it’s clear she was more affected by the relationship than she readily admits. No worries, though; there’s a cute, quirky, lovable light at the end of the tunnel in the form of…

Emily may have been worried about multiple engagements, but when Jef gets down on one knee, how can she say no? The answer: She can’t. Jef’s words of love and praise have her accepting a gorgeous ring, and the two of them set off with Ricki to enjoy their life as a new famly.

Thought Arie and Emily didn’t talk after they left Curacao? Not quite. In the After the Final Rose, Chris Harrison shares some news. After Arie got home, he couldn’t handle how things ended and hopped on a plane to Charlotte, but once he got there, he realized he didn’t want to disrupt Emily, Ricki or Jef and thought better of it. He did, however, chat with Emily on the phone and left her his diary, which she decided not to read out of respect for him. On top of all that, Jef helped smooth things over by calling Arie to help him get some closure, since they were besties throughout the whole season. Man, these three are ridiculously understanding and honourable!

And the real question: Who’s going to be the next Bachelor?

That seems to be the one question left unanswered tonight! Between the studio audience’s reactions to Sean at the Men Tell All last week and Arie at the After the Final Rose this week, it seems likely it will come down to one of them. Excellent options! Let the “Team Sean” and “Team Arie” T-shirt campaigns begin!