Aaron Sorkin is arrogant, smug and potentially a misogynist. And yet no matter what we do, we can’t help loving that dude. He’s just so good at his job. 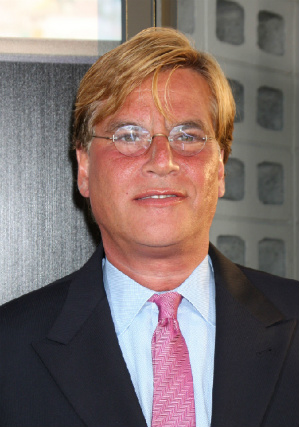 It doesn’t seem as though disliking him would be as great a challenge as it is. Since capturing our attention with his acclaimed screenplay for A Few Good Men in 1992, Aaron has proven to be one of the most egotistical writers in Hollywood. He seems to be the biggest believer in his own hype and is almost incapable of not coming across as arrogant or smug — or arrogantly smug. And with ongoing criticism from many sources that Aaron’s writing tends to swing into misogynistic territory, there is even greater reason to dislike him.

On top of all that, it was recently revealed that nearly all of Aaron Sorkin’s Newsroom writing staff have been fired from the show’s second season. While some people are defending his decision to axe so many of his underlings as a standard “shakeup” in the show’s best interest, it’s hard to view this writer’s room massacre as anything but the success-crazed workings of a power-hungry tyrant. And we thought Simon Cowell‘s season 1 X-Factor cleanse was messy.

But with all these perfectly sound reasons to dislike Aaron Sorkin, we still, through no control of our own, absolutely love him. His writing is incomparable, his style completely his own. And while his arrogance shines blindingly through his impossible-to-follow, rapid-fire, highly theatrical dialogue, we are still entirely under his spell.

Take the now famous scene from the first episode of The Newsroom, in which Jeff Daniels’ character publicly denounces America as a nation far from the greatest in the world. No human on Earth is capable of so unflinchingly spouting off the obscure world statistics he does; at some point during the speech, one can only laugh at this unrealistic and overwhelmingly aggressive Sorkin-esque diatribe. But just when you think your brain is going to explode from this verbal attack, Aaron Sorkin, in true form, slams you with a halting, stomach-dropping punchline. And no matter how much you may resist, the hair stands up on the back of your neck. You’ve fallen in love.

Aaron Sorkin is able to make you feel like both the stupidest and the smartest person alive. When you listen to his writing, you feel like you’re doing your mind a great service, and all you want is more, more, more. However, you also feel like you know absolutely nothing about any topic, ever. It’s a really complicated trade-off.

And yet we always come back to him. Because as much as we hate to feed Aaron Sorkin’s already gigantic ego, we’re thoroughly incapable of not loving him and his infuriatingly arrogant, completely masterful writing. Darn you, Aaron Sorkin.

The Emmy Award nominations are in!
What if all forms of literature got the Fifty Shades treatment?
Morgan Freeman donates $1 million to Obama’s campaign