Snooki recently happened to run into Newt Gingrich, and they really hit it off — she even googled him. What else could Snooks use knowledge of? 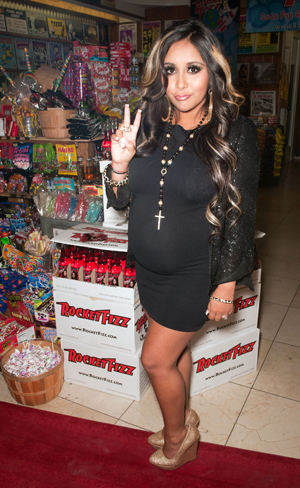 Everyone loves them some Snooki. Admittedly she doesn’t strike us as a Republican favourite, yet here we are…

The very pregnant Jersey Shore star is already on first name basis with John McCain; now she can Facebook Newt Gingrich as well.

Snooks met the Gingriches (Newt and wife Callista) on Wednesday. The trio was scheduled to appear on The Tonight Show with Jay Leno.

“Obviously I don’t know s*** about politics, but I think he’s just such a cute little man,” said the reality star. “I don’t know why everyone hates him so much.”

After some thought, Snooks added, “I guess his views? I don’t know any of his views, but he was nice.”

There it is! We knew she could do it.

But this brings us to an important issue: Other than politics and parenting, what else should Snooki know about?

This motto applies to Snooki physically — she may be tiny, but she is a lot to take in. Hence, she can begin by applying eyeliner and mascara with designated tools instead of slapping them on with a snow shovel for that sexy raccoon-eye look. Then she can slowly shift to decreasing those tanning sessions (if you resemble, albeit sloppily, a cheeto or an Oompa Loompa, you need to stop). Finally, once that skin regains its former human colour, Snooki can start wearing clothes that cover those pesky hush-hush regions and lend an aura of self-respect. Bottom line: Less is more.

Granted, we don’t know what the rules are in New Jersey, but knocking back tequila shots before midday is kind of frowned upon up here — by most, at least. Sure, Snooks is pregnant right now, but what will happen once the baby arrives? We’ve seen the show; we know what’s up. We just wanted to let everyone know that alcohol poisoning is not a holiday folkloric character — it’s more of a demonic possession of your body to remind you to stop chugging vodka from the bottle. Hopefully Snooki will be a bit more smart after giving birth.

This deserves its own category. While leopard prints, hot pink and shiny gold things are all fun, there is so much more to the world than that. Snooki needs to remember she has the personality of a tornado — her wardrobe does not need to reflect it. Maybe one leopard print item at a time paired with neutrals, yes? It’s so crazy, it just might work. Snooks needs to embrace all colours and maybe decrease the lustre of her closet.

What do you think Snooki should read up on?