You guys! The Backstreet Boys are back! For real this time! All five of them! We’re so excited, and we’ll tell you why! Exclamation marks! 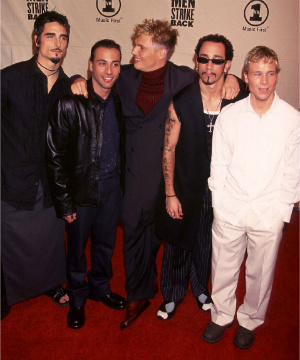 They may be middle-aged family men, but that isn’t stopping the Backstreet Boys from boldly returning to their boy band roots in one of the most exciting music industry reunions since the New Kids on the Block made their comeback. After the elusive Kevin Richardson left the group in 2006 to pursue personal interests, BSB just wasn’t the same. But now all five boys are back together again, recording a new album and planning an appearance on Good Morning America‘s summer concert series at the end of August.

Growing up, nothing was more unifying than doing the “Everybody/Backstreet’s Back” famous arm choreography with countless other preteens on the dance floor. That was decidedly the group’s defining dance move, and if they’re smart, BSB will find a way to work it back into their new songs, lest their once-devoted fans revolt in nostalgia-deprived disappointment. If not, then we expect them to at least bust out something as contagious as that move so we have something to do on dance floors again. The “Single Ladies” choreography is fun, but it’s old.

There’s nothing we love more than singing “I Want It That Way” at the tops of our lungs in the shower. But more than the catchy melodies that make up our favourite BSB hits, we can’t get enough of those completely unspecific love song lyrics that just beg to be sung dramatically. To this day, we still don’t quite know what way “that way” is. Still, we’re so looking forward to the new crop of vague and sappy lyrics that await us on Backstreet’s new album. Our showers are going to be absolutely dripping in cheese.

As much as we adored the wardrobe choices BSB sported all those years ago, we simply can’t wait to see what the boys look like now. We’re hoping they don’t entirely abandon their boy band archetypes — AJ still better be the bad boy, Howie the shy one, etc. — but it’ll be great to see what a 2012, more adult version of those cliches look like. We’re thinking more facial hair and less hair gel is a good place to start.

By now the sticky tack on our Backstreet Boys posters from the ’90s is really starting to lose its adhesiveness. But that’s fine, because now there’s going to be a whole new crop of BSB posters to plaster our walls and ceilings with! The best part about BSB’s return is that now we don’t have to pretend we’ve hung up their posters to make an ironic statement. And if we do stash them away when company’s over, it’s not because we’re embarrassed: It’s because we don’t want to make everyone else jealous of us, OK?

Tom and Katie’s divorce has something for everyone!
No Doubt’s got a new single: “Settle Down”
Finally confirmed! Lana Del Ray new face of H&M campaign